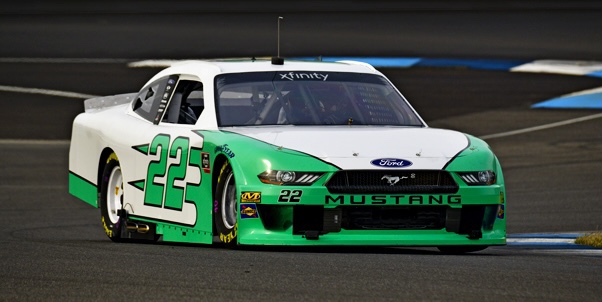 The test is in preparation for the inaugural NASCAR Xfinity Series road-course race at IMS, sponsored by Pennzoil, on Saturday, July 4 during the Big Machine Vodka 400 at the Brickyard Powered by Florida Georgia Line event weekend. The race is part of a revamped schedule for the annual NASCAR event on July 3-5, during Fourth of July weekend.

“I’d consider this one of the big things (to happen in my life),” DiBenedetto said. “Opportunities like this are things I’ll never forget for the rest of my life. I’ll be able to say forever, ‘Hey, I got asked by Mr. Penske himself, that whole team, by NASCAR, folks at IMS, everyone, to come and be the first ever to run the road course and test it out for the NASCAR Xfinity gang.”

DiBenedetto spent the day testing two different road-course configurations to see which will produce the most exciting racing, with both featuring the cars going clockwise, the opposite direction of the oval.

One version was a high-speed, 12-turn road course that features the cars driving through the entire Turn 1 of the oval and down the frontstretch into the infield for the first turn of the road course, which features a heavy braking zone. This was nearly identical to the layout used by Formula One for the United States Grand Prix from 2000-07 at IMS.

The other course was a more technical, 14-turn layout that uses the three-turn chicane inside Turn 1 of the oval before the drivers make their way onto the frontstretch, then stand hard on the brakes to enter the infield for Turn 1 of the road course. This is the same complex of turns used by the NTT INDYCAR SERIES during the GMR Grand Prix in May.

DiBenedetto said after running both layouts there is no wrong answer as to which circuit will best fit the NASCAR Xfinity Series, as both have features that will create several passing opportunities and offer great racing for fans.

“The cool thing is, what we love as road racers is heavy braking zones, and clearly, the end of the front straightaway here, you have a very heavy braking zone,” DiBenedetto said. “There’s high-speed stuff. There’s low-speed stuff. So, it’s pretty much everything we could ask for from a competitor’s standpoint for raceability.”

Wayne Auton, the managing director for the NASCAR Xfinity Series, said the decision on which road course layout to use will be decided with fans in mind.

Auton said NASCAR will take engine and tire data, plus input from DiBenedetto and Team Penske, to the NASCAR R&D Center in Concord, North Carolina, to evaluate which course layout and race distance will best suit the Xfinity Series at IMS. That decision will come in the near future, Auton said.

No matter the course layout, DiBenedetto said he is certain fans will see one of the most unique weekends of racing on July 3-5, including an exciting road course event full of passing, beating and banging, and high speeds Saturday, July 4. Then the facility quickly will be converted to oval configuration for NASCAR Cup Series practice later that afternoon and Big Machine Vodka 400 at the Brickyard qualifying and race Sunday, July 5.

“This is a big, cool change for a really neat weekend,” DiBenedetto said. “We’re going to have Xfinity cars running on the road course here, then it’s Brickyard 400 weekend, and it’s the Fourth of July, and you got the fireworks show, Florida Georgia Line concert. It’s a weekend I would definitely want to come to as a spectator. They’re going to get a lot of show in one weekend.”

Tickets for the entire Big Machine Vodka 400 at the Brickyard Powered by Florida Georgia Line event weekend, which includes NASCAR and the USAC Midget series’ Driven2SaveLives BC39 Powered by NOS Energy Drink, are on sale now at IMS.com and the IMS Ticket Office.