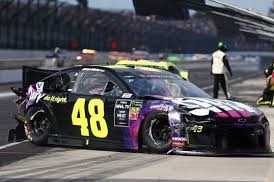 Jimmie Johnson has had a 2019 season to forget. Perhaps it is best to sum up Johnson’s season in one foul statement: Only Hendrick Motorsports driver to miss the playoffs.

Coming off his worst ever full-season points finish of 14th, Johnson enters the final two weeks of the season in 18th.

No wins and just three top-five finishes have made Johnson an afterthought to everyone except his most loyal fans.

The last won for car No. 48 came at Dover in 2017 and, with the early stages at Texas this past weekend being an exception, the seven-time champion hasn’t been a threat at all. Meanwhile teammates Chase Elliott and Alex Bowman have scored wins while William Byron has even bested Johnson in top-five and top-ten finishes while notching five poles to Johnson’s one.

The driver will return for the 2020 season but his status past then is anyone’s guess.