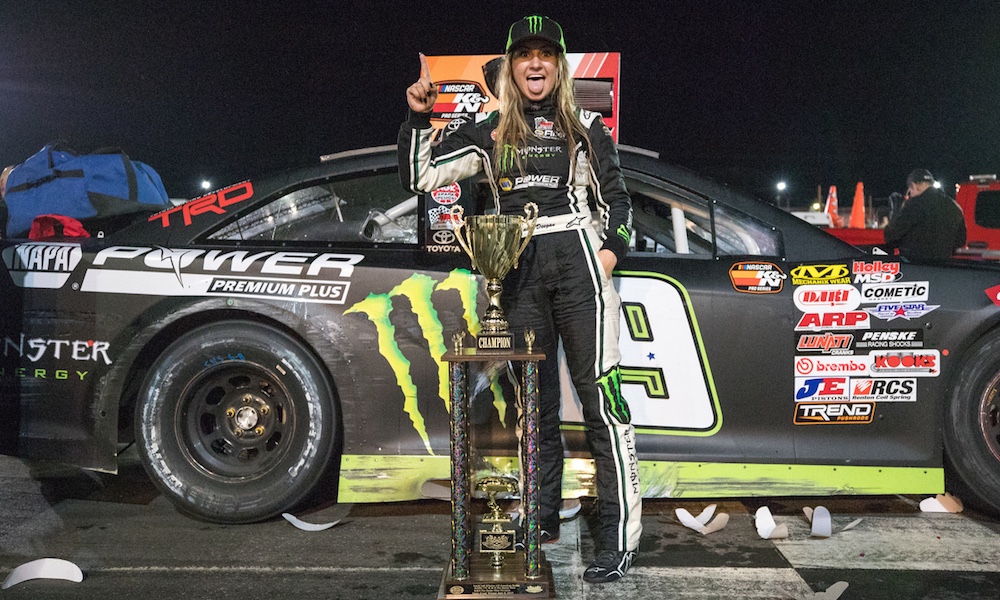 Even rising stars are not impervious to sponsorship trouble.

Appearing as a guest on SiriusXM NASCAR Radio’s “Skinner Round-up” Monday, Hailie Deegan mentioned that her 2020 years on a had not been announced due to a “struggle” finding sponsorship.

In her three wins in the K&N Series and part-time starts in the ARCA Menards Series, Deegan’s sponsors have included Monster Energy, iK9 and NAPA.

“People think it’s easy, think it’s ‘Oh, you get media, you get attention, you get sponsors.’ It’s not that easy,” Deegan said. “At the end of the day there’s not usually just one person that covers all your funding, it takes help from a lot of areas. I’m really just looking at finding partners who want to really commit with me for the long run. So it’s definitely been a struggle and can already tell it’s going to be a struggle in the future.”

Despite saying she was having sponsor issues Deegan than derailed her dream scenario.

“If I had the dream scenario, unlimited budget, which not many people have, which I don’t have, I wish, I’d say I’d be running full ARCA with K&N East,” Deegan said. “Maybe throw in Sonoma for the West Series. … I haven’t looked at the East schedule yet. It all depends on when the schedules get released.

“One thing I really want to do is race (the) Eldora (Gander Outdoors) Truck race. That’s like a dream goal for me for next year.”

Deegan would prefer to run the K&N East Series this year.

“I think the K&N East competition, I feel like the knowledge just from being on the East Coast and the tools they have out there they can use it just helps a lot more with the setups,” Deegan said. “Being out in the West Coast, it’s a little harder just because you don’t have the resources necessarily that the East Coast does and all the people with their knowledge out there.

“But we still make it work for the West Coast, everything’s good out there, but I’d say the East Coast level they just have those resources. And the ARCA series, I feel like the ARCA series has some good competition. There’s a solid top eight to 10 guys that if you brought them into the K&N seres could probably win.”