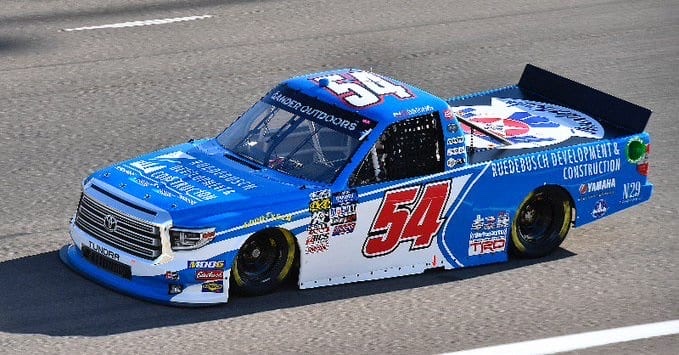 When qualifying rolled around on Saturday morning, Decker laid down a lap time of 20.715-seconds giving her a 26th place starting position in Saturday’s 200 lap race.

The race began and Decker started feeling out her Toyota Tundra. After the first caution of the day on lap 16, Decker radioed to Crew Chief Frank Kerr that she was having a hard time rotating through the center of the corner. The remainder of the stage went caution free. At the end of 50 laps Decker was in the 26th position and had just missed the ‘lucky dog’ at the conclusion of the stage.

Crew Chief Frank Kerr brought his driver to the pits, calling for four tires, fuel, and both track bar and wedge adjustments for Decker. On lap 78 Decker’s teammate, Tanner Gray spun around bringing out the third caution of the day. This time Decker was in the free pass position and was able to join the leaders back on the lead lap. On lap 89 caution waved yet again for the 8 truck. Kerr opted to bring Decker to the pits for four tires, fuel, and a track bar adjustment. At the end of stage two, Decker had worked her way up to the 21st position.

The final stage got underway and Decker was making a charge toward the top twenty. On lap 115, the No. 54 Tundra got swept up in a multi-truck incident off turn four. The incident and repairs caused Decker to lose two laps. As the laps clicked by several incidents occurred throughout the final stage of the race; however, the 54 team was unable to make up the two laps lost to the leader. Decker fought her way past the carnage, until she was once again swept up in a late race incident in the final 10 laps. Despite the attrition and adversity she faced, Decker was able to bring her No. 54 N29 Technologies Toyota Tundra across the line in the 22nd position.

Decker on Martinsville: “We had some bad luck at the beginning of the race and got caught up in a multi-truck incident. Unfortunately, we ended up going two laps down and had no luck getting those laps back. I felt like we learned a lot and showed some great speed. It just wasn’t our night, but I had fun and I’m ready for Phoenix.”