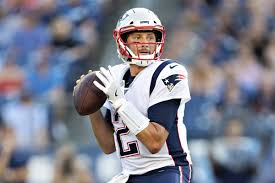 Jacoby Brissett inherieted the starting quarterback job for the Colts with the surprising retirement of Andrew Luck. Now the one-time backup to Tom Brady may be welcoming someone who shares something in common with him

Among the teams linked to the recently released Brian Hoyer are the Colts. Hoyer is coming off a two-year stint as the backup to Brady himself and ironically was acquired by the Patriots two moths after trading Brissett to the Colts in 2017. The Patriots need for Hoyer existed after a trade of Jimmy Garoppolo to the 49ers.

The 33-year-old Hoyer has spent time with seven different teams making 37 starts over 10 seasons. He has 48 career touchdowns, 30 interceptions and has thrown for 9,902 yards in his career since starting with the Patriots in 2009.

Hoyer’s best season came in 2015 when he made nine starts for the Texas and threw a creer high 19 touchdowns.