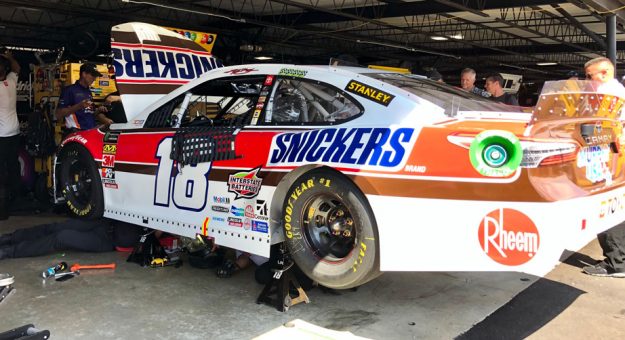 If Kyle Busch is to put his Snickers throwback car into victory lane in the Bojangles’ Southern 500 he will have to do so from the back of the field.

Busch was scheduled to start 33rd in the 39 car field which saw William Byron join Fireball Roberts and Bill Elliott as the only drivers to win poles at the Daytona 500, Coca Cola 600 and Southern 500 in the same season.

“Something is wrong,” Busch said after his qualifying for Sunday’s race. “I don’t know what’s wrong. I’m not that slow. That’s a second off of what it should have been. …

“Everything was fine until about halfway down the back. It started to lay down. It started to shake and vibrate. When I got out of the gas in (Turns) 3 and 4 and got back to throttle, it got worse. So, I don’t know. It fired up and ran fine here on idle, but if you plug your computer in order to check it and look at anything, you go to the back (of the field).”

Joe Gibbs Racing crew members switched out the engine on Busch’s car after the qualifying session.