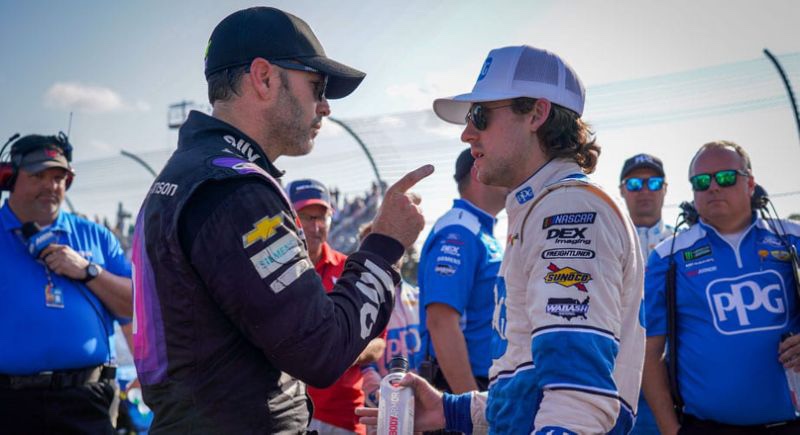 It was not quite an apology but Ryan Blaney and Jimmie Johnson have talked to one another about their incident at Watkins Glen International.

According to RacinBoys.com, Blaney took some beers over to Johnson’s motorhome on Friday; which coincidentally was parked next to his at Michigan International Speedway this weekend.

“We talked for half an hour,” Blaney told RacinBoys.com. “I thought it ended really well. It was just a discussion, two guys talking, explaining our sides. We didn’t agree on some things, but it was agree to disagree on a few things.”

“Things happen on the track with two different drivers. You’re never going to be like, ‘Yeah, you were right on that.’ You’re always going to have your mind-set on what happened in that instance. Some things, we’re not going to agree upon but it was just nice to talk it out. I kind of just wanted to say we talked and we’re fine.”

“In my eyes, it ended really well,” Blaney added. “Jimmie is a good friend of mine. It’s just the whole week has been blown up—blown out of proportion a lot—for sure. I got his side and said I didn’t appreciate what he said about me afterward and explained it. And I was fine with it.
From what was on display in Saturday’s NASCAR Gander Outdoors Truck Series race it is fair to wonder if either driver has some concerns racing near each other Sunday.
“No, the racing side-by-side with him doesn’t worry me. We’re still going to race each other hard like we always have, but it was good to talk to him at the race track face-to-face.”
Tweet
Facebook
Twitter
Pinterest
WhatsApp
ReddIt
Digg
Previous articleAustin Hill wins Corrigan Oil 200, Michigan Truck Series Results
Next articleAustin Cindric goes back to back, Mid-Ohio Results