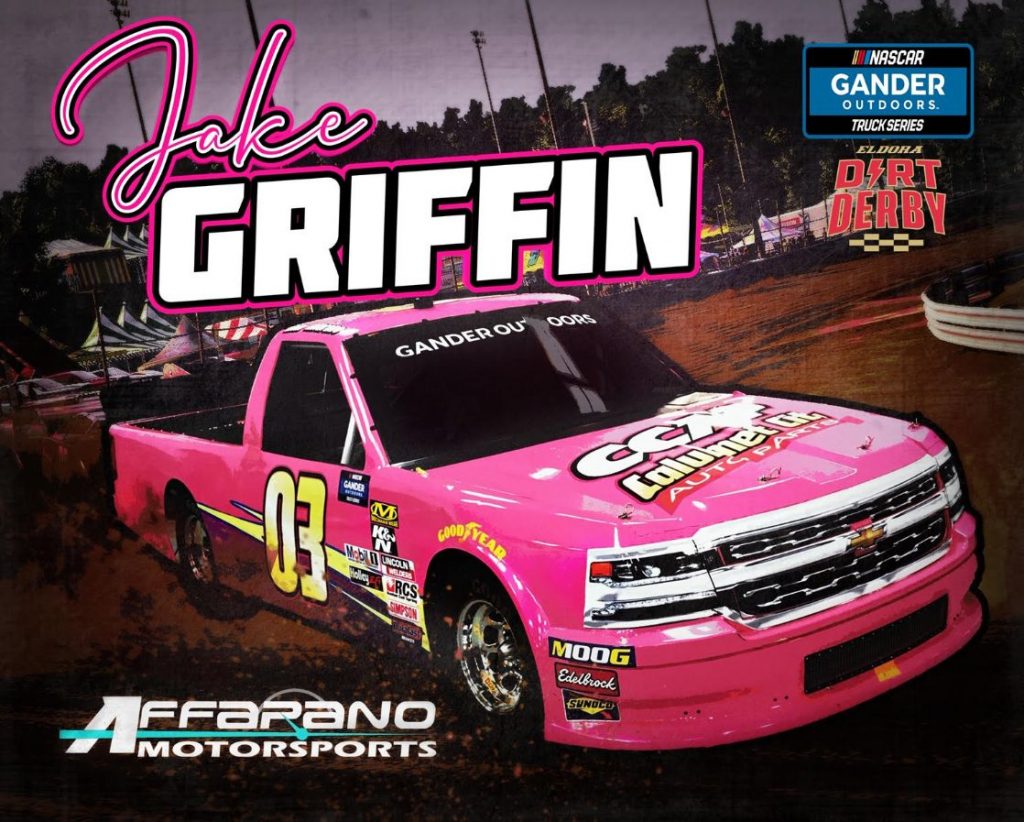 Jake Griffin will return to the site of his best NASCAR Gander Outdoors Truck Series finish, 4th, as he straps in to the #03 Chevy Silverado of Affarano Motorsports.
Jake just ventured to Alaska Motorsports Park where he scored a win in a Pro Late Model
Jake is equally comfortable on asphalt or dirt
Jake has made five starts in the NASCAR Gander Outdoors Truck Series, having debuted under the tutelage of Mike Mittler and his MB Motorsports operation.
In his last outing at Eldora, Jake drove Red Horse Racing’s #11 Toyota Tundra. After starting 11th, he brought home a fine 4th place finish.
Jake Griffin, Q&A
What are you looking forward to the most at Eldora?
“Everything! What’s not love about Eldora? It’s a fantastic track that has so much history and it’s one of those places that you get a special vibe from. Everything about it just awesome.”
What was it like to race in Alaska and win?
“Talk about complete opposites- Alaska Motorsports Park and Eldora Speedway! I could look at mountains as I raced on asphalt in cool Alaska and now we head to one of the world’s finest dirt tracks during the hottest part of the year in Ohio. Alaska was really cool and I’m so glad I had the chance to race there. As great as it was to bring home the trophy, my focus is on Eldora now.”
You and crew chief Buddy Sisco have known each other for a long time. You’ve got to be glad to have him atop the pit box at Eldora.
“Buddy’s so good at everything- building the trucks, strategy, making the calls, you name it.  I’m thrilled to be able to head to the track with him.  I think we can run well together.”
You’ve worked with team owner Mike Affarano before, so you have some familiarity with him, too.  That’s got to make the trip to Eldora easier.
“Yeah, Mike’s a grass roots racer.  He’s old school and I love that.  We’re not heading to the track with the newest or most pristine truck out there, but I know we’ll be tough out on the track.”
Speaking of the truck, you’re driving a pink one at Eldora…
“Hey, Dale Earnhardt’s first race car was pink, so I’m in good company. Besides, we will be easy to spot no matter how much dust and dirt gets kicked up!”
Sponsors for Eldora
The #03 Chevy Silverado will carry the colors of the Clayne Crawford Foundation, AIR West: Adventures In Racing, American Trash Service, Comfort Solutions, Comfort Inn of Piqua, Ohio and Cut It Out Graphics.  MechanixWear, Maradyne and WIX Filters will serve as associate sponsors.