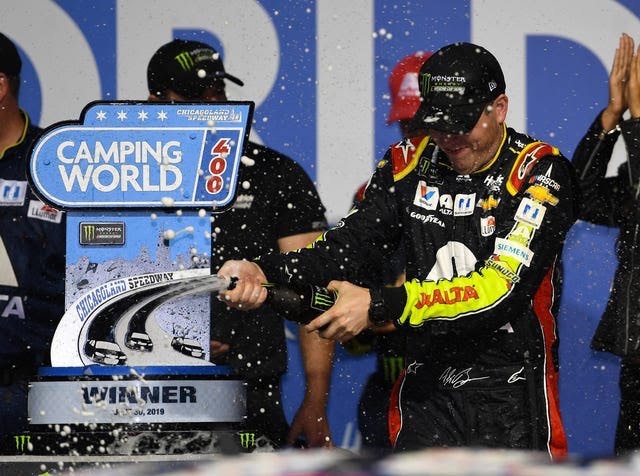 Alex Bowman won the Camping World 400 at Chicagoland Speedway on Sunday for his first career win in the Monster Energy NASCAR Cup Series.

Austin Dillon began the race on the pole but Jimmie Johnson would make short work of him taking the lead before lighting and rain hit the Joliet area track halting Monster Energy NASCAR Cup Series action.

Once the track was dry Kevin Harvick established himself as a threat to win but after some pit strategy and an untimely caution involving teammate Clint Bowyer it would be Denny Hamlin sinning the first stage.

Harvick held the lead until William Byron took it from him just before lap 100. The next caution aided Kyle Busch who was one lap off the pace at the end of stage one. Ryan Blaney remained one lap down due to his earlier pit strategy.

Chase Elliott would push Harvick for the second stage win but lap 160 hit with him in second. Blaney would get the free pass. An awful pit stop would drop Elliott the 20th after running over the rear air hose.

Kyle Larson and Alex Bowman would both lead early in the third stage as Harvick hit the wall in turn two to bring out a caution that benefitted Daniel Hemric. All of that happened after Busch had to make an unexpected pit stop losing a lap.

Bowman would lead almost entirely to the end with Larson briefly getting by him only to get passed back.

When the race was over Bowman got stuck in the grass while attempting to do a burnout.