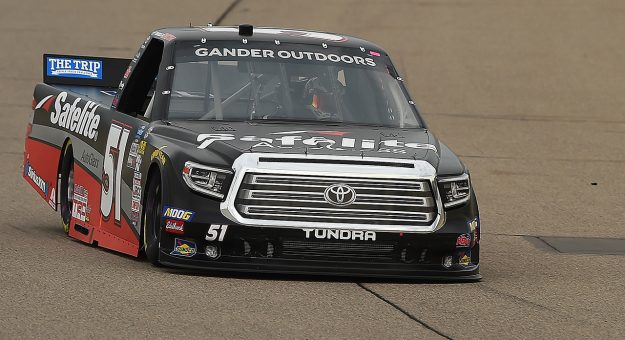 Chadler Smith won the pole for Saturday night’s running of the Gander Outdoors Truck Series race at Iowa Speedway after qualifying was rained out.

The No 51 truck will begin the M&M’s 200 from the 7/8 mile short track on the pole joined by 30 others looking to go to victory lane. Smith will be tasked with putting the Kyle Busch Motorsports Toyota back in victory lane collecting $50,000 like Greg Biffle did a week ago in Texas.

This marks Smith’s first truck series start to which the youngster spoke earlier in the week about.

“I think it’s really cool. I’ve always dreamed about racing in NASCAR in general, whether it’s the Truck Series or Xfinity Series or even the Cup Series when I get a little older, if I ever get that opportunity,” said Smith. “It’s definitely kind of a dream come true. I’ve always dreamed of racing when I was a little kid, when I was watching NASCAR and I was like ‘I really want to do this someday,’ and look where I am now. I’m doing it now and for the best team there is in the series. I’m very blessed to be where I am now, and thankful for everyone that’s been around me and that’s gotten me here.”

FS1 and MRN have coverage of tonight’s Truck Series race from Iowa.