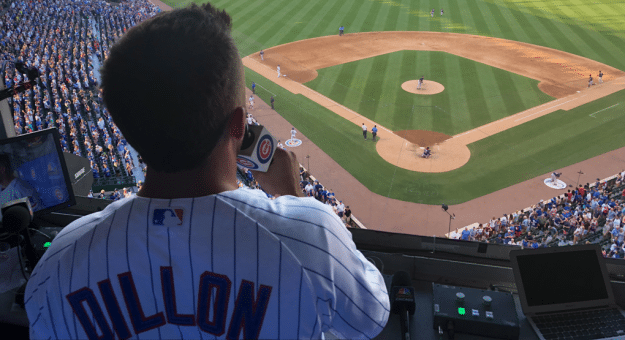 While to many it may seem like an individual sport, it takes a lot of teamwork to be a successful NASCAR driver. It’s important to work together with your pit crew and teammates in order to see success on the track. For 2018 Daytona 500 champion, Austin Dillon, that teamwork was instilled in him at a young age during his time on the baseball field playing for Southwest Forsyth County (N.C.) Little League.

“Little League teaches you how to work with a team and put in a lot of hard work and effort,” said Dillon. “The coach that we had taught us the importance of fundamentals and hard work, and that’s something you can take in everything you do. I still use a lot of those team philosophies that we used in Little League in everything I do today.”

In the summer of 2002, Dillon and his teammates from North Carolina made the run of a lifetime as they went on to become one of 16 teams to make it to Williamsport and compete in the Little League Baseball® World Series.

“That experience was really something special. I got to make some lifelong friends during that time and one of my best friends to this day, Robbie Scott, was our shortstop on our team and we’ve been friends ever since,” said Dillon. “It was a really special time and I’m glad I got to be a part of it. I always watch baseball a little differently now after playing in the Little League World Series.”

Although his team was unable to secure a win, Dillon did pick up a hit during his time in Williamsport, going 1-for-4, but more importantly, cherished his time and took home lifelong memories and friendships that he will never forget.

“We just had a good time. I really got into pin trading when I was there and still have my pins from that time, which is pretty cool,” said Dillon. “I actually pulled them out this year when I found out I was getting this award. I was all about the pin trading.”

After his appearance in South Williamsport, Austin played Junior Varsity baseball at his high school for most of his freshman and sophomore years, but his interests were shifting gears into racing. Although racing quickly became his focus, Dillon did never forgot the lessons he learned during his Little League days.

Today, the 29-year-old racer, nicknamed “The Ace,” continues to show his talents on the racetrack and has quickly broken into the NASCAR circuit, even taking home the Daytona 500 title in 2018. Along with his impressive racing resume, Dillon remains a role model to young kids everywhere and even took the time in 2017 to video chat with the Southeast Region team from nearby Greenville, North Carolina, to wish them luck.

“Every year when the Little League World Series comes on TV, we’re all gathered around watching it. It’s always something that’s on and talked about when we’re in the trailer and getting ready for the weekend,” said Dillon. “I just wanted to do my part to give back and congratulate them. I had a lot of good coaches and mentors throughout my life that influenced me and hopefully I can give back the knowledge that I acquired from them.”

For his dedication to the values of Little League, and for his outstanding service as a role model within the community, Little League International is honored to announce Dillon as a 2019 Little League Hall of Excellence enshrinee.

“Each year, we look to find those men and women who have gone on from their days as Little Leaguers to take those values and life lessons they learned on the playing field to their role as leaders in the community,” said Stephen D. Keener, Little League President and CEO. “Austin Dillon has proved to be a tremendous leader both on the racetrack and as a role model for the future generation of our world. We are honored to present this award to Austin and are excited to hopefully welcome him back to Williamsport to relive the magic he experienced in 2002.”