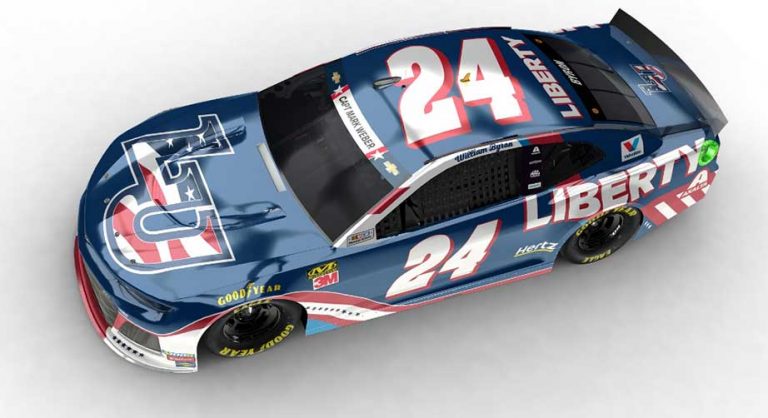 Liberty University unveiled the patriotic paint scheme Hendrick Motorsports driver William Byron will display in the Coca-Cola 600 (May 26, 6 p.m. ET, FOX), and it’s a scheme that honors one of its own.

Byron’s No. 24 Chevrolet will take on a decidedly red, white and blue look for the most patriotic race of the year — and one which honors fallen service members with the NASCAR Salutes’ 600 Miles of Remembrance program.

According to a news release from the school, Byron’s car will honor U.S. Air Force Captain Mark Weber on the windshield header. Weber, who died in a helicopter crash in 2018, also was a Liberty student.

.@WilliamByron will hit the track in a new paint scheme in a few weeks.

“It’s an honor to be able to have Captain Mark Weber’s name on our car in Charlotte,” Byron said. “It’s the least we can do to show our appreciation to him and his family for the sacrifice he made for our country. Racing at Charlotte Motor Speedway is already special to me as it is my hometown track and where I grew up racing. The 600 Miles of Remembrance makes it even more special with what it stands for.”

The 21-year-old second-year Monster Energy NASCAR Cup Series driver is coming off his fourth front-row start this season at Dover, a Monday race at which he finished eighth. In his first season with crew chief Chad Knaus, Byron is 19th in the standings. He won his first career Busch Pole Award, at the Daytona 500 no less, earlier this year.