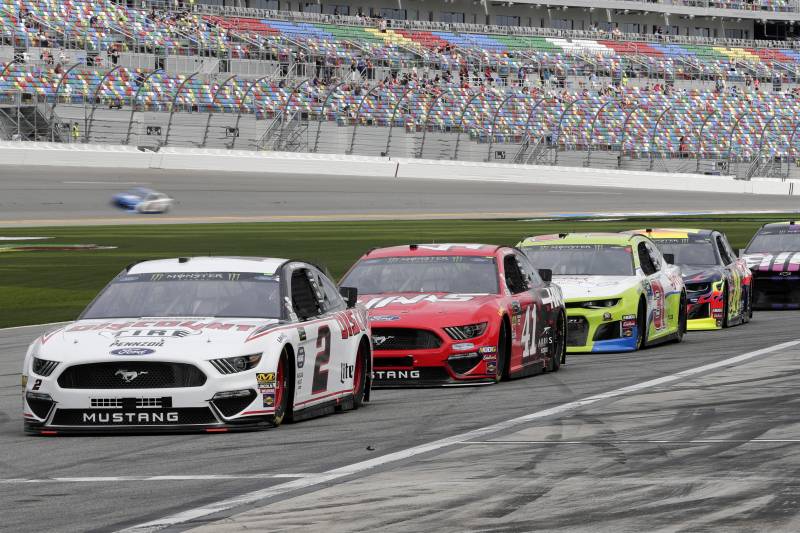 Talladega Superspeedway’s high banks produce some of the most spine-tingling, unpredictable, high-speed action in all of NASCAR, but for all the genuine suspense generated, Ford drivers seem to have cornered the market on victory recently.

The make has won the last seven consecutive Talladega races and eight of the last nine. Reigning Monster Energy NASCAR Cup champion Joey Logano is the defending winner of Sunday’s GEICO 500 (2 p.m. ET on FOX, MRN, SiriusXM NASCAR Radio) and has three victories in a Team Penske Ford Mustang on the 2.66-mile speedway – all within the last seven races there. His teammate Brad Keselowski has three wins in the last nine races and five career victories overall at Talladega – best among active drivers.

So not too surprisingly, oddsmakers have picked Keselowski and Logano as the favorites this weekend followed by fellow Ford drivers Clint Bowyer and Kevin Harvick. Six of the eight “favorites” drive Ford Mustangs.

While Chevrolet holds a 41-26 victory advantage over Ford all-time at Talladega, certainly Ford drivers have found the winning formula as of late, and it’s not typically been a case of final lap drama. In all but one of the last seven races, Fords have combined to lead at least 40 percent of the race laps. In Logano’s win last April, seven Ford drivers combined to lead 126 of the 188 laps (67 percent). Last October, Stewart-Haas Racing’s Aric Almirola won the Playoff race leading only the checkered flag lap, but six Fords combined on the day to lead 184 of the 193 total laps or a stunning 95.3 percent of the race.

Team Penske, in particular, has discovered the magic to the superspeedway style of competition, winning five of the last seven Talladega races. Roush Fenway Racing Ford driver Ricky Stenhouse Jr. earned his first career win (from the Busch Pole position, no less) in the 2017 spring race and Almirola claimed his second career win with his work last fall.

In all, Fords have led 785 of 1,336 laps of competition (58.7 percent) during their seven-race string of superiority.

The hot streak is not completely unfamiliar to the Talladega high banks, where certain drivers have historically proven themselves masters of the superspeedway. Chevrolet, for instance, won 13 consecutive races from 1999 (the late Dale Earnhardt) to the 2005 season (Jeff Gordon) and 17 of 18 through 2007. Hall of Famer Dale Jarrett was the lone interruption in that streak, claiming the 2005 fall race win in a Ford.

Almirola looks to go back-to-back at Talladega
The most recent winner at Talladega Superspeedway is Stewart-Haas Racing driver Aric Almirola, who shows up with every reason to believe his good fortune will continue. The Tampa, Florida, native has top-10 finishes in his last five races at the big track, including three top-five efforts and the Playoff win last October that propelled him into the Round of 8.

The superspeedways of Daytona and Talladega have been highlights on Almirola’s resume. In addition to the Playoff win at Talladega, he won the 2017 Xfinity Series race there. His first career Cup victory was at Daytona International Speedway in July of 2014. Plus, he won an Xfinity race there in 2017 – meaning four of his five wins in the top two series have come at these behemoth tracks.

“I always had to go to these races and be aggressive because, back then, they were our only realistic options to win races,’’ Almirola said. “It was the only way I could make it into the Playoffs, and we were able to do that in 2014. They’ve been good to me. I’ve always gone into those races with that mindset.”

That recent Talladega victory was instrumental in Almirola finishing a career best-fifth in the 2018 Monster Energy NASCAR Cup Series championship in his first season driving Stewart-Haas Racing Ford Mustangs. And Almirola has responded with another stellar season start. He won the pole position at Atlanta and had a streak of six top-10 finishes between Atlanta and the Bristol races. He’s currently ranked 11th in the points standings and his 72 laps led is already nearly half his career-best season total of 181 laps last year.

Kyle Busch was close in Daytona; will his luck change at ‘Dega?
The current Monster Energy Series points standings leader Kyle Busch shows up at Talladega Superspeedway hoping to re-establish some good vibes with one of the most unpredictable circuits on the schedule. A win for the Toyota driver this weekend would snap a seven-race Talladega victory streak for Ford.

The Joe Gibbs Racing standout’s three wins and six top-fives through the opening nine races of 2019 are tops in the series and have given him a 20-point edge over Team Penske driver Joey Logano in the standings. Busch also has nine top-10 finishes in nine races this season. But the Talladega high banks may prove to be the biggest challenge of the year. He has one win (April, 2008) in 27 races at Talladega.

In the last six races at Talladega he has a pair of top fives, but also three finishes of 26th or worse during that time. He led the most laps (48) of his career at Talladega in the 2017 spring race but finished third.

“Denny makes the most out of what he’s got for equipment and I’ve got the same stuff and I’m not quite as forceful in situations as he is, and he makes that work for him. We certainly gained a lot of confidence from Daytona. Our cars were better there and I’m hoping we can carry that momentum at Talladega. I won’t try to put myself in a bad spot to cause something, but it’s always a challenge and it’s always different.” 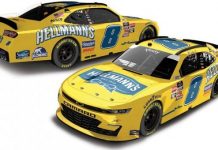