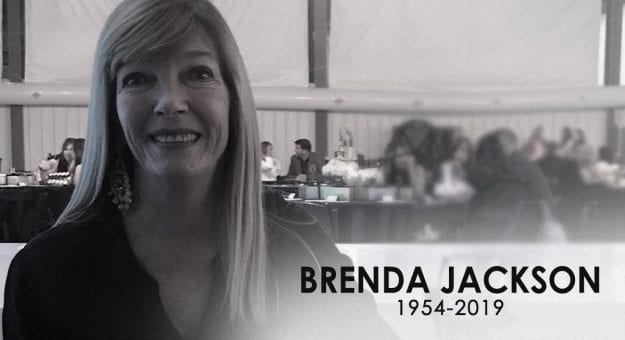 Jackson was a longtime employee of JR Motorsports, joining her son’s NASCAR Xfinity Series race team as an accounting specialist in 2004. Her sarcastic sense of humor injected a brand of humor at JR Motorsports that became part of the company’s fabric as it grew into a full-time NASCAR racing operation in 2006 and a championship-winning organization in 2014, according to the team.

Along with a 15-year career with JRM, Jackson also was one of four children to legendary NASCAR fabricator Robert Gee, who built cars for a number of high-tier drivers, including Dale Earnhardt.

Brenda Gee and Dale Earnhardt married in 1972, having two children over the span of their marriage. After the couple separated, their two children stayed with their mother while Earnhardt continued to get his racing career off the ground.

After a house fire that left Brenda, Kelley and Dale Jr. homeless, Brenda moved back to Virginia. She re-married in 1985 to Willie Jackson, a firefighter in Norfolk. After Willie’s retirement, the couple moved back to North Carolina with stepdaughter Meredith to work with Kelley and Dale at JRM.

“I’m a very, very lucky woman, as I get to interact with my kids almost every day,” Jackson said last year according to JRM’s official announcement of her passing. “I’ve got two bright, beautiful kids that I am very proud of. Kelley’s standards are very high. She conducts herself that way and she expects that of everyone else. Dale Jr. just gets bigger and bigger. I am very proud of his accomplishments, but as a mother I am proudest of the way he handles himself with honesty and the way he cares about his family and his friends.”

Jackson was preceded in death by her parents, Hazel May Overton Clark and Robert Edward Gee, and her sister Sandra Gee.