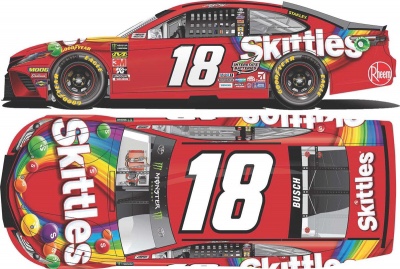 Busch enters this weekend as the only driver who has finished inside the top 10 in the first three races of the MENCS season.

The Skittles brand made its NASCAR debut in 1998 in partnership with MB2 Motorsports on the No. 36 Pontiac for driver Derrike Cope. In 1999, driver Ernie Irvan took the wheel of the Skittles No. 36 Pontiac and went on to take the top starting spot in the prestigious Brickyard 400 at Indianapolis Motor Speedway. Busch delivered back-to-back Brickyard 400 victories for Skittles in 2015 and 2016 with candy-splashed victory lane celebrations for the Skittles brand, and he returned Skittles to victory lane in 2018 by winning in March at Bristol (Tenn.) Motor Speedway.

In 27 Cup Series starts at the Phoenix oval known as the “Diamond in the Desert,” Busch has two wins and an impressive 19 top-10 finishes, including four in a row from the spring 2007 through fall 2008 events, and he won the pole for the spring 2006 race. Last November, in the first race on a newly configured ISM Raceway layout that saw the start-finish line relocated as part of a large infield renovation project, Busch went to victory lane after leading 117 laps.

In addition to the TicketGuardian 500k, Busch will also compete in the Xfinity race this weekend.

“Restarts were for sure different last time – a lot of guys cutting the dogleg and stuff like that. It made for some interesting moments and things. You saw that in the Truck Series race and Xfinity Series race, then the Cup race. We won that one, which was great for us as a team and being able to secure our spot for the final four. Now we come back here in the springtime. It will be, I am sure, a little bit different of a track. Obviously, a way different aero package that we’ll have to figure out and what’s in store for us when we get there with our Skittles Camry this weekend.”

How different will these cars be at Phoenix?

“I am not sure, exactly. Phoenix being a short track, everywhere we have been so far, it’s getting into throttle-on time. Making sure you’re in the gas. Sometimes it’s making sure you don’t get out of the gas. Being at a short track is going to be an interesting thing because we’re used to being out of the gas and on the brakes and pedaling the vehicle through turn four and making sure you’re not too loose or whatever it might be. I don’t really know how the cars are going to react in traffic. The cars, with more downforce now, you get a bigger wake. The spoilers are taller, so the air coming over the top of the car hits that spoiler and goes higher. So, it’s taking longer for the vehicle behind it to see that air, the closer it’s getting to the car in front of it. The aero effects are going to be greater. We’ll have to see how all of that translates to Phoenix and a flat, mile racetrack.”

“You mean, with the 750 package? Yeah, Denny (Hamlin) tested out there in Phoenix and he said it feels restricted. It doesn’t feel like a 750 like we’re used to. I would say maybe 830 last year or whatever it was. But still a little bit of a reduction on what we’re used to having.”

What does it take to be successful at Phoenix?

In addition to 10 Xfinity Series wins at Phoenix, you also won in your second Cup Series start at the mile oval and added a win last fall. Do you enjoy racing at Phoenix?

“Phoenix is a pretty neat place, even though they made some changes with the repave. The track has worn in with racing and the sun, so it’s getting back to a fun place again. It was interesting to see how the place raced last fall with the change in where the start-finish line is and how that changed the racing. For some reason, I’ve always run well there. I don’t know if it’s that I’m comfortable being back close to home on the West Coast, or what. I always have a little more fan support out there, as well. As for the track itself, you’ve always had two distinctly different corners at Phoenix, which makes it fun and challenging all at the same time.”