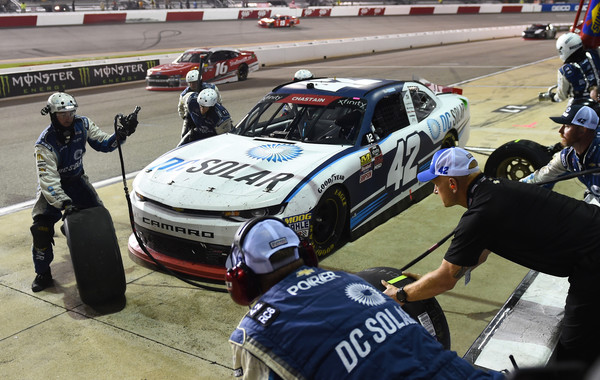 The number of entries in the NASCAR Xfinity Series continues to dwindle. Not long after Roush-Fenway Racing closed the doors on its Xfinity Series teams (No. 16, No. 60), Chip Ganassi Racing followed.

Ross Chastain had been slated to drive the No. 42 Xfinity Series Chevrolet Camaro with DC Solar as the primary sponsor. That all chagned following an FBI raid on DC Solar’s headquarters.

“Due to a lack of sponsorship funding we will cease operation of the #42 Xfinity team in 2019,” team owner Chip Ganassi said in a statement.

“This was a difficult decision for me to make and it comes with much anguish as this is a championship calibre team and more importantly because it affects a number of good people’s livelihoods.

“Running a car without proper funding is difficult to do.”

Chastain is still tied to a contract with Ganassi but apparently is free to pursue any available rides right now. The closure of the No. 42 Xfinity Sereis team is said to not have any impact on the Monster Energy NASCAR Cup Series rides of Kyle Larson and Kurt Busch.

Steve Newmark of Roush-Fenway said that the decision to close their Xfinity Series was necessary for the organization to allocate resources for its Cup Series cars driven by Ricky Stenhouse Jr. and Ryan Newman.

“We’ve decided on how we’re positioned we’ll step out of that for a year and see how that goes and just focus all the resources, all the engineering, all the windtunnel on making sure that we perform to our expectations at the Cup level,” he added.

Roush cars have been a fixture in the second series of NASCAR but with sponsorship dwindling the organization has seen its entries across NASCAR reduced to just two full-time cars.