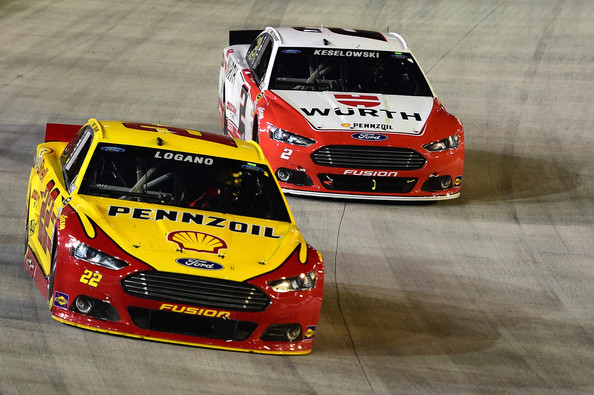 Joey Logano The Irwin Tools Night Race was the second trip for the Cup Series to Bristol this season. Consisting of 500 laps the race began with Kevin Harvick on the pole.

Saturda’s race had much of the tight racing that fans have come to expect and the tempered moment of when Denny Hamlin tossed his Hans device at Harvick following a crash that also involved Dale Earnhardt Jr.

A speedy penalty would take Harvick out of contention while Jamie McMurray who led a race high 148 laps found himself just hanging in the top ten in the closing laps. Joey Logano would jump out to the lead late in the race but ran into lapped traffic trying to pass Jeff Gordon allowing teammate Brad Keselowski to close the gap. Unable to get the caution he needed, Gordon would allow Logano around and ultimately into victory lane.

The win is the third of the season for Logano (career high) and sixth of his career.