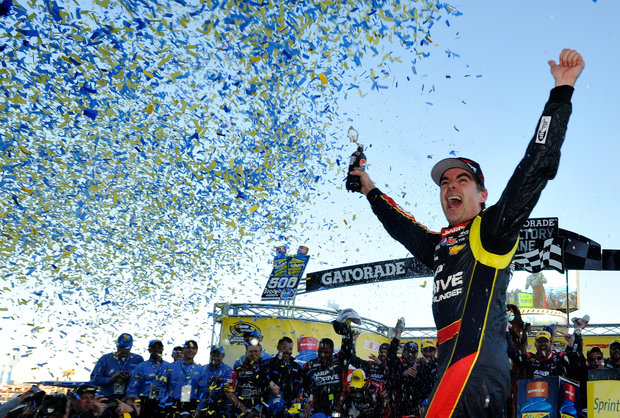 Jeff Gordon was decent this year. He only captured one win at Martinsville Speedway. Gordon’s teammate, Jimmie Johnson, pushed himself more into the record books with his sixth title. Johnson now has 66 wins and six championships while Gordon remains with just four championships and 88 career victories.

Back in the 1990’s Gordon was aggressive and into the early 2000’s, but when did Gordon stop being aggressive? I was recently watching an old race on YouTube, the 2006 UAW Ford 500 at Talladega Superspeedway, and Gordon was most certainly more aggressive.

He may have applied that quote to his racing 5-10 years ago but he’s becoming older. He’s losing his magic on the racetrack.

After the Martinsville victory, Gordon blew a tire down at Texas Motor Speedway dropping him from third to sixth in the Sprint Cup standings. Following the season finale at Homestead Miami Speedway Gordon concluded the season sixth in the standings.

Once again Gordon, and the rest of racers, were defeated by Johnson. This isn’t the first time Gordon in particular has been beaten by Johnson. During the 2007 season they ended the year 1-2 for Hendrick Motorsports in the standings with Johnson coming out on top.

Johnson’s also been blessed with a wonderful crew chief, Chad Knaus. Whenever you have a dominate combination you’re bound to win and that’s what happened to both Johnson and Gordon. During the 1990’s the tag team to beat was Gordon and Ray Evernham and now its Knaus and Johnson.

After Gordon was ripped from Evernham he was forced to partner with Steve Letarte. Together they never won the Sprint Cup gold but captured a couple victories. Following Hendrick’s crew chief swap Gordon was given Alan Gustafson after Mark Martin left Hendrick.

During Gustafson and Martin’s time together they produced only one victory at Phoenix International Raceway and Martin never improved on that. Now Martin is retiring from the racing action. Call me crazy but Gustafson could end Gordon’s career as well.