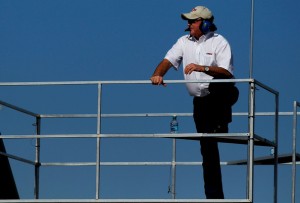 It was bound to crash. Richard Childress Racing had no direction to go but down. Yet, few would have predicted it would get this bad.

Let’s cut to the Chase, The NASCAR Sprint Cup Chase. In 2008 RCR had three drivers finish inside the top ten in points. Kevin Harvick finished fourth that season, followed by Clint Bowyer and Jeff Burton and all was right at RCR.

The next season none of RCR’s cars made the Chase. The team and outsiders said the expansion of RCR from three to four cars was the problem. While that explanation seemed to fit as Harvick and Bowyer rebounded the following season as the fourth team was dropped, its not the real fix.

RCR is no longer a top tier organization in NASCAR. It did not happen over night but has gradually happened since that 2008 season. There were times when it seemed that RCR was making a step forward, as was the case when Harvick won three races early last year. But, we should have known better then that.

Since the 2011 race at Indianapolis there has been little to get excited about at RCR. The occasional bright spots are not even happening anymore. It should come as no surprise that Kevin Harvick would leave the team for Stewart Hass Racing.

This year it is hard to remember that Childress even has a Cup series team. Harvick quietly made the Chase and remained that way when it started in Chicago. Jeff Burton has had his name mentioned only when he’s involved in accidents, save for the Super Speedways. Paul Menard has one top ten finish since the Chase started, and that is as many as Harvick and Burton combined.

Bad decisions were made before the season even started. Luke Lambert ,who had provided a spark with Jeff Burton’s as crew chief at the end of 2011, was moved to the No. 2 car of Elliott Sadler in the Nationwide Series. Drew Blickensderfer was brought in to work with Burton. Considering the way Roush Fenway Racing moved Blickensderfer around after Matt Kenseth asked for his removal as the 17 car’s crew chief should have been a clue. No disrespect to Blickensderfer but pairing him with Burton, a driver with the same driving style as Kenseth, was a bad idea. Clint Bowyer was allowed to leave the organization. Bowyer wanted to stay at RCR because they had provided his chance. He even went as far to seek out sponsorship. According to Bowyer he talked to Childress about 5-Hour Energy sponsoring him for RCR. As the story goes, Childress said the numbers did not work. Income and a talented driver were lost.

When Bowyer left for MWR so did Scott Miller. Miller took over as the VP of  competition at MWR. RCR’s reaction was one of nothing. Nothing at all in fact. A replacement for Miller was not hired until last month when Dr. Eric Warren took over Miller’s old position.

There there is the case of Gil Martin. Martin has been Harvick’s crew chief on and off since 2009. He recently was brought back to the position while Shane Wilson was moved to the No. 31 car of Burton.

If it seems like RCR is a Nationwide Series team, that may be because so much attention has been paid to their endeavors at that level. Austin and Ty Dillon’s rise though the NASCAR ranks has caught the eyes of many and sadly for RCR it appears much of Childress’ attention also. Childress is a constant fixture on pit road in the Nationwide and Camping World Truck Series.

“I think a lot of the emphasis has been put on the grandsons but ask Elliott Sadler if he thinks that’s a bad thing,” Jeff Burton said recently. “I think if the company has done everything in their power to make sure the grandsons have run well, than (Sadler’s) No. 2 car has benefitted from that. Then Joey Coulter has benefitted from that. I think the No. 2 car would have a difficult time saying that the No. 3 (of Austin Dillon) car has received anything that they haven’t, to my knowledge. I know (crew chief) Luke (Lambert) pretty well and he’s never mentioned it to me. They’ve done everything in their power to put the best truck and Nationwide teams on the track. They owe that to their sponsors.”

Burton has two years left on his contract with RCR. Sponsor Caterpillar is also signed for two years. Perhaps there is time to turn it around before Burton’s contract is up. Burton recently said that 2013 was a make or break season, perhaps he retires if RCR does not get its act together.

To make matters worse for RCR they also lost income in the form of equipment sales and rentals. Recently Earnhardt-Ganassi Racing informed Childress that they no longer wanted to use his engines in their race cars. Starting in 2013 the No. 1 and No. 42 car will have Hendrick horsepower under the hood. Childress denied that it was a bad thing for his organization and instead tried to pawn off the line that other teams are interested in them. True or not, it’s worth nothing that there is not a single competitive car at the Sprint Cup level seeking engines for 2013.

Where does RCR go from here? Unless the team makes a break though it does not appear that 2013 will be any different. Just the mention of Harvick’s eventual departure has already set Childress off while Burton and Menard are in the also-ran category.