If you thought finding Waldo was hard, try finding him on a race car. 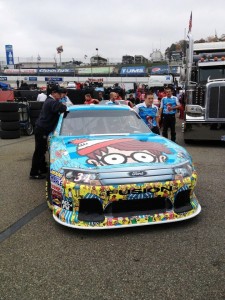 The familiar Waldo will make his debut in NASCAR as he celebrates his 25th anniversary.

“ I’m not going to spoil it for anyone and divulge just where Waldo is featured on our No. 34 Ford this weekend,” joked Ragan. He continued, “When I first saw the car in the shop I had to walk around it a few times to figure out where he was at. My crew chief, Jay Guy, claims he was a little faster than me and was able to spot Waldo right away, but I guess we’ll just have to take his word for it. I can picture NASCAR fans everywhere sitting at home with their die-cast of our No. 34 car and looking for Waldo, just as our entire team did in the shop this week.”

Ragan finished 24th in the sprint race at Martinsville. Ragan finished 4th at Talladega three weeks ago and is currently 27th in the overall driver standings. The status of Ragan for 2013 is unknown as he signed a one year deal with FRM prior to the season starting.