It’s no surprise to see an animal rescue on Ryan Newman’s car. Newman, who at last count had six dogs of his own will feature Code 3 Associates, a 501(c)(3) non profit organization specializing in animal rescue and recovery in disaster areas on his car.

(picture of car below)

Code 3 has formed a partnership with Stewart-Haas Racing.
Made possible by a benefactor with interests in animal-related causes, Code 3 Associates will be the primary sponsor of SHR’s #39 team and driver Ryan Newman throughout the Hollywood Casino 400 race weekend Oct. 17-21 at Kansas Speedway in Kansas City, Kan.

Formed in 1985, Colorado-based Code 3 Associates is a national response team that at the request of local government officials provides animal rescue and recovery during any kind of disaster.

The organization has evolved from one unpaid volunteer to at least 75 professional responders around the country, which includes animal welfare, law enforcement, fire, EMS and veterinary specialists from the United States and Canada.

While its focus is animals and their owners, Code 3 Associates trains its responders to the standards of human rescue, and Code 3 Associates also provides training to conduct thorough investigations into animal welfare, all of which is accredited by Colorado State University (CSU) and the CSU Veterinary Teaching Hospital. 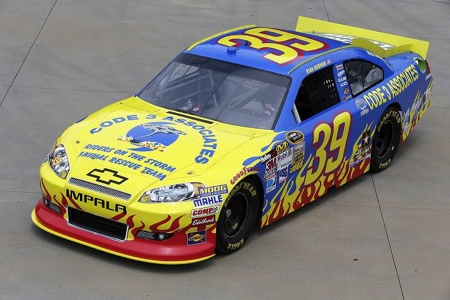