Joey Logano still has not made mention of what his plans are for the 2013 season but it could be coming sooner than later.

On ESPN today, Joe Gibbs car owner of the #20 Home Depot Toyota said in regards to Logano’s future that, “Everything is up in the air.” Logano was said to of had two offers on the table, one from Joe Gibbs Racing  (JGR) and the other is rumored to be from Penske Racing. (Read, Joey Logano, should he stay or should he go?) 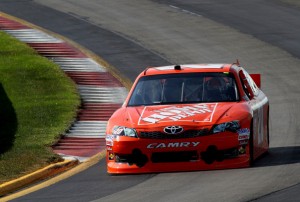 Matt Kenseth is supposedly headed to JGR, but bar his contract still no announcement has been made about what car number he will drive, but it is believed to come down to if Logano stays at JGR or if he decides to leave the organization that he has been with since he was 16 years old. (Read about why Kenseth probably has not announced where he is going)

If Logano opts to leave JGR, Kenseth will most likely drive the #20 Toyota with Home Depot as the sponsor. If Logano opts to stay, he would probably keep the #20 but sponsorship is still uncertain at this time.

If Logano decided to head to Penske Racing to drive the No. 22, he would be guaranteed sponsorship with Pennzoil/Shell.

Gibbs did not directly address Kenseth, but said he was hoping to announce something in two weeks. Two weeks would put us at Atlanta Motorspeedway, which just happens to also be Home Depot’s headquarters.

If you remember back Logano during interviews said his decision could be made in “a few days to two weeks”.

Penske Racing said they are wanting to announce who will be driving the No.22 by Chicagoland, which is two weeks after Atlanta. Logano is not the only driver to be rumored for the ride.