Renee Metzgar was familiar with the name of AJ Allmendinger for years, but became an avid fan in March. It was then that her nephew choose Allmendinger to take her on a parade lap around Charlotte Motor Speedway prior to May’s race. When she first heard the news of A.J.’s failed drug test she went online. There was she hoping for more information; or maybe some support from other fans?

There Mark Farrell was doing his “normal Dinger tweeting and texting about how he was gonna take the trophy home” and suddenly his reasons to watch the Coke Zero 400 were gone. “It felt like a blow to the head” says the New Jersey resident.

Allmendinger had tested positive for a banned substance. Sam Hornish was flown in to drive the #22 car normally driven by Allmendinger.

Renee’s gut reaction was also one of shock. It did not fit with anything she knew of AJ. She had spent weeks researching the driver prior to meeting him at Charlotte. In that meeting with Allmendinger she was calmed because the 30 year-old born driver told her that he had spent the time to read her tweets. “I was a fan for life.”

While the initial reaction shook her the talk online from others was bad as well. She “got angry” once she logged onto the internet because “people were saying hurtful things and judging him” without knowing the details or what led the the failed test. Days later little is known about what caused the charismatic driver to fail a drug test.

Former teammate Scott Speed was also surprised by the news. He  sent out a message of disbelief.

Signed to a one year deal with Penske Racing this was supposed to be the opportunity of a lifetime for Allmendinger.

“He understands the opportunity. He wouldn’t ruin that” says Mark who met Allmendinger on multiple occasions. “He’s great to talk to. Always ready to have a conversation. Really down to earth.” There was never any doubt that Allmendinger was the driver for him. “It wasn’t hard becoming a die hard AJ fan. I was hooked right off the bat. His attitude and hunger makes him fun to watch on the race track. No one out there wants it more then the Dinger.”

It’s those characteristics that have given rise to the #SupportAJ movement. It started with some simple tweets and caught on from there. It became not just an effort to refute negative reports but a chance to show support for their driver. “It’s heartwarming to see them rally around their driver like this” says Tracy from Wyoming. In between working two jobs she has spent the last three years running a fan-based website, dingerworld.com,where she has often been mistaken for one of his PR reps. When she met AJ 2 years ago at Las Vegas she knew she had found her driver. “He put me at ease right away with his teasing humor. He smiles and jokes constantly and is just full of energy.”

It’s that type of following Allmendinger has earned during his 6 year stint in NASCAR. Fans like Tracy have seen it all. From failing to qualify in his first four attempts at the Sprint Cup level to when he recorded his first top-ten finish 20 races into his second season. They followed him from Red Bull to Richard Petty Motorsports. Last season Allmendinger set career best in top-ten finishes, he was 15th in the driver standings and appeared to be on the verge of a breakout. In the #43 car nonetheless. They relished in his victory as part of Michael Shank Racing during this years 24 Hours of Daytona and followed him to Penske Racing to see it happen.

When Tracy found out the news about AJ she was on a family vacation in South Dakota. Immediately she thought “there was no way AJ would ever do something to deliberately jeopardize his career. Racing is his life.” While starch in her support for AJ she does believe “NASCAR did what they had to do in order to follow their own drug policy and I have no problem with them erring on the side of caution for the sake of safety.”

T.J. from South Carolina says she had been a NASCAR fan for years though never to the level of her mother. When she was a child, T.J., watched and laughed at her mother for yelling at the television while standing no further then two feet away. It wasn’t until February of 2001 that she began to understand the connection NASCAR had with her mother. Dale Earnhardt made contact with Turn 4 (and to steal a phrase from Michael Waltrip) in the blink of an eye the sport was forever changed.

When T.J. began attending races with her mother both supported Earnhardt’s son, Dale Jr. It made sense for her mother to support the son of her hero but T.J. never felt that click. That connection wouldn’t be made until the pre-race activities for the 2010 Southern 500. The host for the event wanted to give a fan the chance to get their photo taken with Allmendinger. Doing the ‘Crazy Chicken’ she was noticed. She recalls that AJ asked the host “What about her? She looks pretty excited!” After some light joking about the bright green Dale Jr shirt she was wearing the two had their photo taken.

That moment was the fork in the road for T.J. She began to read up on who the ‘Dinger was and broadened her knowledge of NASCAR. When she joined twitter one of the first persons she made contact with was Tracy. Eventually the photo of her and AJ made it to the eyes of the driver which sent T.J. into “hyperventilation.”

When she met Allmendinger again he told her that he had read her tweets. She gave Allmendinger a mix cd to which she was surprised to find the driver had listened to and thanked her for later on twitter.

“The #supportAJ hashtag is exciting her her.” “I saw that TJ’s Mommy [@tjsmommy722] had put that at the end of a comment, and I told her we should try to fire it up and get it trending! WE DID IT!!! NATIONWIDE!!!” She has no reason to stop showing her support for AJ. “He has made me feel like I was actually someone important and he treated me like a friend, something more than just one of 18,000+ fans.”

There there is the story of Heather from San Jose, California. Heather had heard about AJ from her husband (then boyfriend) David some seven years ago. When Heather met AJ she asked if he remembered her husband from his BMX days. To her surprise not only did Allmendinger remember him, he had read David’s tweets about Heather going to Sonoma without him.

Her reaction was like may of those mentioned earlier. As Heather puts it #SupportAJ was started to “show our love and support to AJ.” Their ultimate goal? “We hope it lifts his spirits and his families to see people from both coasts believing in him no matter what.” Michael Shank, Former Miss Sprint Cup Monica Palumbo, and NBL BMXer Chad Kady joined in support by retweeting Heather’s comments.

AJ Allmendinger is more then just a NASCAR driver to his fans. Heather’s son Thomas lists his three favorite racers as Daddy, Lighting McQueen, and AJ. He chooses AJ “because he never gives up.”

After originally posting this I got a message from Jason Nance on twitter. A fan from Archdale, North Carolina who has met AJ more then 15 times over the last 4 1/2 years. Jason raced with AJ in this years Kings Cup – an indoor karting charity event that benefits the Paralyzed Veterans of America.

Allmendinger has went the extra mile when meeting with Jason’s son. He refers to Nance’s 5 year old son Joseph as ‘Little Dinger’ and has always given the youngster “hugs or high fives.”

Disbelief was the word that Jason used in describing his feelings in finding out about AJ’s suspension. Jason would like NASCAR to “step up and be more transparent in what they are doing to promote fairness to AJ and all drivers who may find themselves in the same position.” He also is not a fan of NASCAR’s decision to suspend Allmendinger for a result that was ‘slightly above’ positive.

“His energy for the sport was so passionate, I instantly became a fan” says Jason. He continues to use the #SupportAJ tag because he wants his driver back in the sport and his name cleared. ” If he screwed up, he would own up to his mistakes. I support AJ and the Walldinger team because they do their best every week to race their best and to involve the fans.”

If you’ve read this far you probably wouldn’t be surprised to know that Allmendinger has taken the time to wish Jason a Happy Birthday the last couple of years.

AJ didn’t give up on any of his fans. He was calm, remembering and himself. Renee, Mark, Tracy, TJ, Heather and Jason are not about to give up on AJ.

You can follow these fans on Twitter by clicking on their user names below. You can also show your support by using #SupportAJ in your tweets. 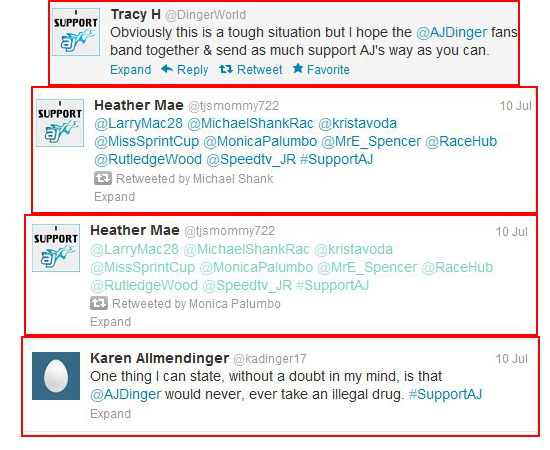 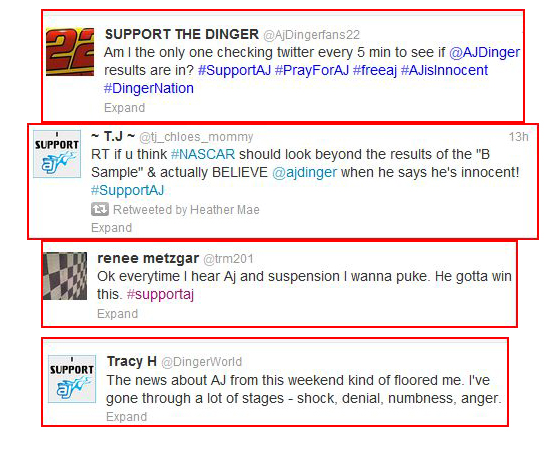 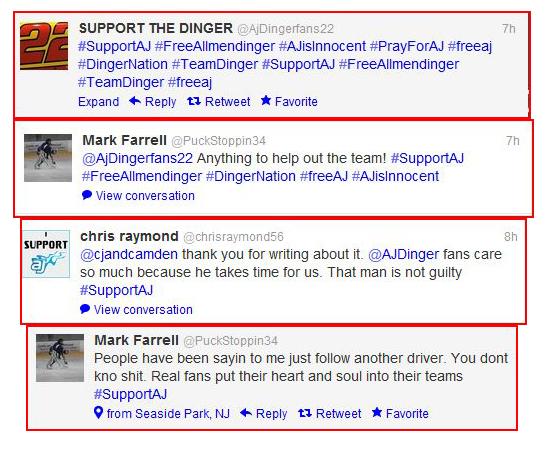 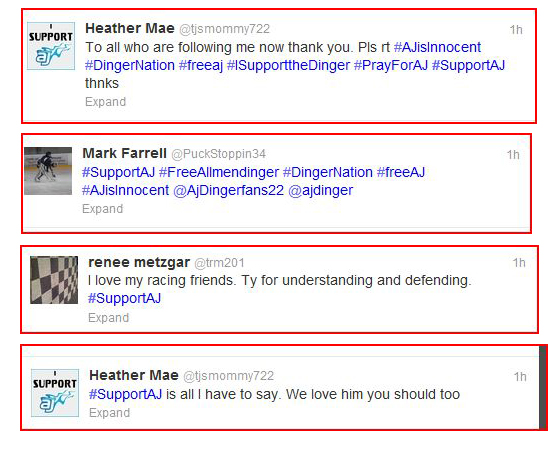