Fast food restaurant Burger King has signed a NASCAR licensing agreemenet with BK Racing which will see their logos on the #83 and #93 Toyotas. In Monday’s running of the Daytona 500 the #83 was driven by Landon Cassill while the #93 was driven by David Reutimann. Travis Kvapil is also expected to share some time behind the wheel of the #93 while Reutimann drives the #10 for Tommy Baldwin Racing.

“I’m extremely happy to welcome Burger King Corp. to the team and really proud to be associated with such a great brand,” said Scott Gunderson, president and co-owner of BK Racing LLC and a Burger King franchisee. “This demonstrates another important step in getting the BK Racing team ready for the season. As a longtime franchisee, I look forward to a successful racing season and know firsthand the benefits of a partnership with a winning team.”

Gunderson purchased the assets of the former Red Bull Racing team. This ensures that the team will have cars and guaranteed spots in the next four races of the Sprint Cup schedule. Cassill finished 22nd during the Daytona 500 while Reutimann finished 26th. Both cars are listed on the entry list for Phoenix.

Cassill drove for Phoenix Racing last season in their #51 Chevrolet.

This is not the first time Burger King has been involved with a NASCAR team. Burger King most recently appeared as a sponsor of Tony Stewart on his #14 Sprint Cup car. Other notable drivers who have ran with Burger King on their car are Bill Elliott and Joe Nemechek. 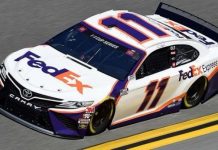