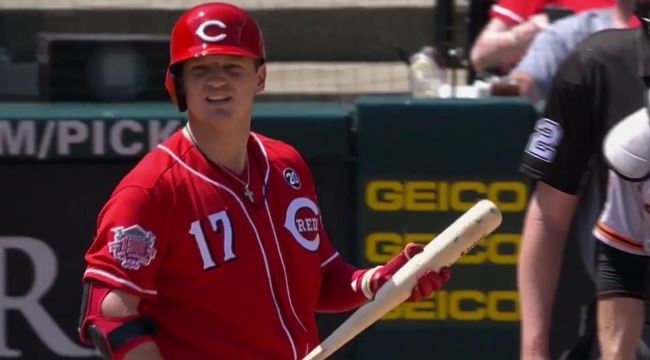 Josh VanMeter took the rough ride though the minors. A fifth round pick of the San Diego Padres, VanMeter of Ossian, Indiana, spent two years in nearby Fort Wayne suffering a season ending injury in 2015 before climbing to Double-A San Antonio and eventually into the Cincinnati Reds organizaion after the 2016 season.

In his debut for the Reds on May 5, VanMeter walked and promplty stole a base. A hit by pitch, an RBI and others would follow before VanMeter would collect his first big league hit on May 8 against the Oakland A’s.

It was the only time VanMeter reached base in the 13 inning game that the A’s would eventually win.

VanMeter was promoted to the Reds roster upon the teams decision to release veteran outfielder Matt Kemp who had been acquired in an offseason trade with the Dodgers which also netted the Reds starting pitcher Alex Wood, outfielder Yasiel Puig and infielder Kyle Farmer.