Braves waiting on Dickey decision before picking up option for 2018 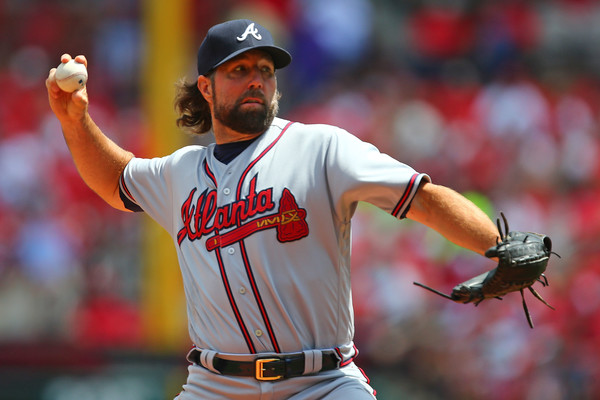 If R.A. Dickey wants to pitch again in 2018 the Braves will have him reports Jon Heyman.

The team has a $8 million option for the veteran knuckleballer who posted a 4.29 ERA and compiled 190 innings over 31 starts in his first season for the Braves.

With numerous questions about the rotation the Braves surely would love to have some sort of veteran presence within the rotation. Currently it’s up in the air whether or not opening day starter Julio Teheran returns or is traded.

Last offseason Dickey was one of three veterans the Braves brought in as stop-gaps as they tried to give their minor league arms more time to be ready. A year later and the Braves rotation does not appear to be much better.

Dickey arguably had the most success of three three pitchers the Braves brought in last winter. Bartolo Colon was ineffective at best and was outright released. He ended up spending the rest of the year with the Twins. Jaime Garcia continued to be inconsistent but ultimately was traded to the same Twins and then subsequently to the Yankees.

Mike Foltynewicz, Sean Newcomb, Luiz Gohara, Lucas Sims, Matt Wisler and Max Fried all are under contract and made starts at some point in 2017 for the Braves.