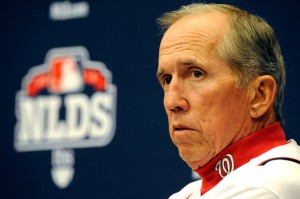 The Washington Nationals were the surprise team of the year. Davey Johnson led the team to their first post season appearance and believes that there is unfinished business.

While Johnson understands the criticism about his late inning decisions in Game 5 he stands by them.

“Any manager in baseball, they will tell you, if you can get to your closer with a lead, you’ve done good. I don’t give a rat’s a– what anybody else thinks. If it’s a one-run lead, a two-run lead, you did it,” he told the newspaper.

He said he told the players he was proud of them despite the playoff loss. The Nationals finished with the best record in baseball at 98-64 and won their first NL East title.

Johnson became the manager of the Nationals in 2011 after Jim Riggleman quit mid-season when the team would not tender him a contract for 2012.