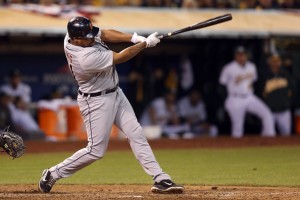 Tonight was the start of the American League Championship Series. The New York Yankees were taking on the Detroit Tigers for Game 1 of a possible seven game series.

Doug Fister started for the Tigers, he went 6.1 innings and gave up six hits. Andy Pettitte was the starter for the Yankees, he went 6.2 innings giving up seven hits and two earned runs.

Prince Fielder had an RBI single after Miguel Cabrera was intentionally walked, Delmon Young singled and Detroit Tigers took a 2-0 lead. Young would hit a home run in the eighth inning and Avisall Garcia would single in another run to up the lead to 4-0.

The Yankees trailed 4-0 entering the ninth when Ichiro Suzuki hit a two-run home run. Following a walk to Mark Teixeira the Yankees prepared to try and tie the game. Raul Ibanez would continue his post season mastery hitting yet another home run, this time off of closer Jose Valverde over the right field wall.

Octavio Dotel would record the final out in the bottom of the ninth before the game went to extra innings.

The Tigers made their come back in the 12th inning when Cabrera was able to get on base. Young then doubled on a line drive to center field allowing Cabrera to score. 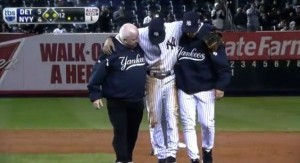 During the 12th inning,  Yankees shortstop Derek Jeter was trying to field a ground ball from Tigers shortstop Jhonny Peralta when he went down to the ground in pain. He was helped off the field being able to put no weight on the foot. This was an immediate concern as this was the second time Jeter had injured his ankle since the September 12th game against Boston.

After the game, manager Joe Girardi said Jeter fractured his ankle and is done for the season.

Tigers right-fielder Andy Dirks then singled on a sharp ground ball that allowed previous hitter Don Kelly to up the score 6-4.

Drew Smyly pitched the last two innings  and was able to close out the game in the bottom of the 12th. Tigers won with a score of 6-4 and take game 1 of the series.