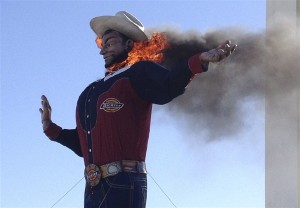 g Tex. The iconic sixty foot tall statue had greeted fair visitors  since 1952 went up in flames just days before the fair was set to close for the year.

This year the fair had been celebrating Big Tex’s 60th birthday.

“It’s a great loss for us because of its icon stature,” fair spokeswoman Sue Gooding said.

“He’ll be back, bigger and better than ever,” she said.

The cause of the fire which destroyed Big Tex is not known. The statue does have a few electrical controls that move his mouth and head. Fair organizers are currently dismantling the framework that was not damaged with a crane.

The following statement was released by Dickies who had sponsored Big Tex. 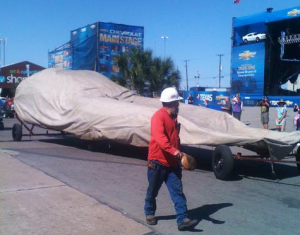 “Dickies® has proudly been the official clothier of Big Tex for 15 years. Although we’re saddened by today’s news, we’re confident that together with the State Fair of Texas, Big Tex will return better than ever in new Dickies apparel,” said Matthew McCartin, VP of Marketing, Williamson-Dickie Mfg. Com

Big Tex made an appearance in an episode of King of the Hill. Hank Hill tells his son, Bobby,  “Look, son, there’s Big Tex. He’s like the Grand Canyon and the Statue of Liberty rolled into one.”