UPDATE: Lolo Jones has made the US bobsled team. 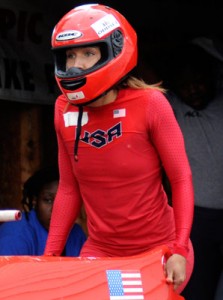 Lolo Jones may be back at the Olympics. Jones is training for the U.S. bobsled team and she is doing surprisingly well.

Todd Hays, the U.S. bobsled coach, invited several track Olympians to speak to potential team members. When prompted Jones took a chance to push a bobsled. Her two-run time of  1:57.01 is currently second best and only 0.05 seconds behind Jamie Greubel and Aja Evans.

“It’s a new sport for me and there’s a ton of room for improvement,” Jones told Sports Illustrated. “I’m coming in here trying to learn everything quickly. I’m looking forward to fixing some things and hammering it out.”

The team will be announced later this week. Former football star Herschel Walker made the U.S. bobsled team in 1992, but that team managed only a seventh place finish in France.