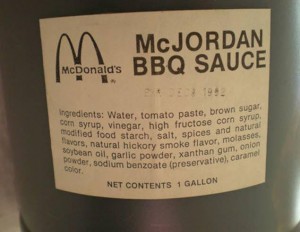 Apparently a jug of sauce for the ‘McJordan’ has sold for $9,995 on eBay. The sauce went on the specialty hamburger created for Michael Jordan and was sold in Chicago and other markets 20 years ago.

The sauce expired long ago but was to be used on the McJordan sandwich which was the first sandwich to be named after a person.

Mort Bank, the sell, is a former McDonalds’s franchise owner from Bismarck, N.D.Bank says someone bought the sauce for ‘Buy it Now’ price.

The McJordan was a sandwich which included pickles, cheese and bacon.

“There was a lot of interest,” he said. “Despite Michael Jordan’s popularity, the sandwich wasn’t a national promotion.”

Bank has sold many items from his days at McDonalds. Previously he sold a statue for a few thousand dollars and has also sold trading cards, cups and other novelties.

Bank wouldn’t reveal any information about the buyer — only that he was from Chicago.