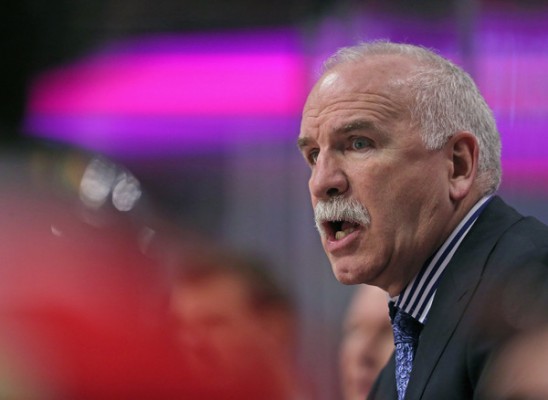 The Blackhawks fell 2-0 on Tuesday night to the Sharks and coach Joel Quenneville was none too happy.

After Brandon Mashinter scored what appeared to be a first period goal to give the Blackhawks a 1-0 lead the play was challenged. Officials ruled that Sharks goalie Martin Jones was interfered with and disallowed the goal.

The Shawks would eventually take a 1-0 lead before adding an empty net goal at the end of the game. Had Mashinter’s goal been allowed it’s unclear how the game would have played out but a 1-1 tie could have happened.

Joel Quenneville storms out of his postgame presser after discussing Mashinter's goal being disallowed. #Blackhawks pic.twitter.com/Qo0gwxKbBS

Speaking to reporters after the game Quenneville spoke about the disallowed goal.

“It’s gotten to a different level,” Quenneville said. “I don’t know the rules anymore, or something’s changed, because my understanding, played a lot of hockey, I don’t know. I think everybody has an interpretation of what’s a good goal and what’s a bad goal, but I can’t believe it.”

Quenneville then threw up his hands and walked out of the press conference.