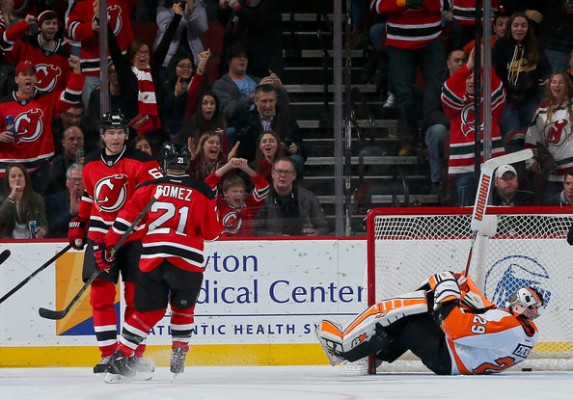 Jaromir Jagr continues to amaze. Approaching his 43rd birthday, Jagr became the oldest player to record a hat trick as he led the New Jersey Devils to a 5-3 win over the Philadelphia Flyers on Saturday night.

Jagr’s three goals were joined by two others off the sticks of Patik Elias and Scott Gomez. All five of the Devils goals came from players 35 or older.

“It’s not easy to score in this league anymore,” Jagr said after hte game. “With the videos, the preparation, the systems they play, plus the goaltenders are so good. I am happy for every opportunity to score goals.”

Jagr surpasses Gordie Howe who recorded his last hat trick at the age of 41 and 216 days. It was the 15th of his career and first since March 26, 2006. Ironically that hat trick also came against the Flyers but while Jagr was a member of the New York Rangers.

“I had luck on my side tonight,” Jagr said. “I wasn’t really looking for it.”

Jagr has 714 goals and is only three behind Phil Esposito in fifth place all time.

“We’re not all going to be Jaromir Jagr,” Gomez said. “You can pick up things, like his work habits. We can all bring something to the team but we all wish we could put up numbers like that. It’s not going to happen. If everyone knows their role and knows what to do, we’re going to be tough.”