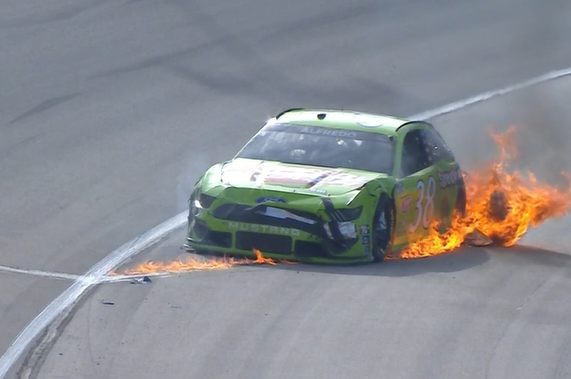 Anthony Alfredo was able to escape his No. 38 Ford Mustang after it hit the outside wall and became engulfed in flames at Texas Motor Speedway.

The incident took place on lap 305 on a restart. No other cars took damage though the No. 17 of Chris Buescher could be seen skidding ahead of Alfredo on the apron of the track.

Anthony Alfredo was able to climb out of the car after this crash and fire.#NASCAR
Watch on @NBC or @PeacockTV: https://t.co/7NW8hhZFP9 pic.twitter.com/M1L7QK3e87

Alfredo’s car went ablaze after coming to a stop.

We’re very happy to see @anthonyalfredo climb out of his No. 38 car after that accident. pic.twitter.com/m2VwwcrspT

A red flag was displayed after the accident with 29 laps remaining in the race.