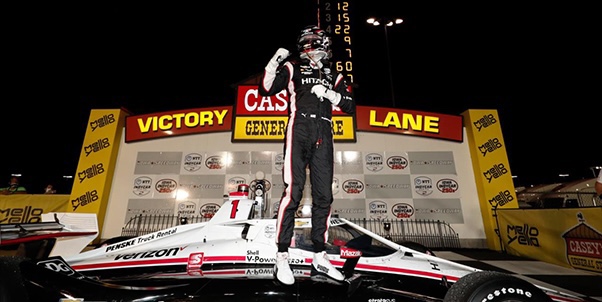 NEWTON, Iowa (July 18, 2020) – Defending NTT INDYCAR SERIES champion Josef Newgarden proved Iowa Speedway might just be his best racetrack on the schedule as he put on a dominating performance Saturday night to win Race 2 of the Iowa INDYCAR 250s Doubleheader.

Newgarden became the first INDYCAR driver to win at Iowa Speedway from the pole, easily driving to his first win of the season and 15th of his career in the No. 1 Hitachi Team Penske Chevrolet. It’s the first time Newgarden has won a race since capturing last year’s race at Iowa 363 days ago.

Newgarden’s win completed a sweep of the doubleheader on the 7/8th-mile oval by Team Penske, as Simon Pagenaud won Friday night after starting last.

“Feels really good,” said Newgarden, who finished fifth in last night’s Race 1 despite leading 68 laps. “I don’t know what we’ve got to do to keep the bad luck off us, but hopefully this is a good start.

Newgarden is no stranger to success at Iowa Speedway. He earned the third win at Iowa of his career, with his previous wins coming in 2016 and 2019. The track is now tied with Barber Motorsports Park as Newgarden’s winningest racetrack. He also solidified his position as the all-time lap leader in Iowa with 1,115, a total padded by leading 214 of 250 laps Saturday night.

Rounding out the top three behind Newgarden and Power was Graham Rahal, scoring his second podium of the season in the No. 15 Hy-Vee Honda.

Newgarden’s determined drive to Victory Lane started from the drop of the green flag. He led the first 56 laps and only relinquished the lead during a green flag pit stop cycle. He retook the lead on Lap 63 and held on until the next round of green flag pit stops came at Lap 106.

O’Ward kept his No. 5 Arrow McLaren SP Chevrolet in Newgarden’s rear-view mirror for a large chunk of the night, closing the gap to within half a second just past the halfway point in the race. But O’Ward had a slow pit stop on Lap 172 that ruined his chances of challenging Newgarden for the win.

O’Ward and his team attempted to undercut Newgarden and pit early, hoping the fresh Firestone tires would put O’Ward ahead of Newgarden. During the stop, the car was dropped from the jack before the left rear tire could be secured. O’Ward drove off and stopped just past his box. His team rolled him back into the pit box to secure the tire, but any chance he had at challenging Newgarden for the win was over. He finished 12th, the first driver one lap down.

Shortly after O’Ward’s pit road mishap, the second caution of the night came out on Lap 180 as three-time Iowa winner Ryan Hunter-Reay lost control of his No. 28 DHL Honda exiting pit lane and hit the inside wall. The 2012 series champion’s night was ended, and he finished 22nd.

Hunter-Reay’s incident didn’t deter Newgarden as he easily drove away from the field on the Lap 193 restart and never looked back.

The performance elevated Newgarden into third in the series standings, 53 points behind points leader Dixon and four points behind second-place Pagenaud.

The NTT INDYCAR SERIES drives into a two-week break after a grueling stretch of five races in three weekends. The series will be back in action Sunday, Aug. 9 for the Honda Indy 200 at Mid-Ohio Sports Car Course in Lexington, Ohio.

Results Saturday of the Iowa INDYCAR 250s Race 2 NTT INDYCAR SERIES event on the 0.894-mile Iowa Speedway, with order of finish, starting position in parentheses, driver, chassis-engine, laps completed and reason out (if any):