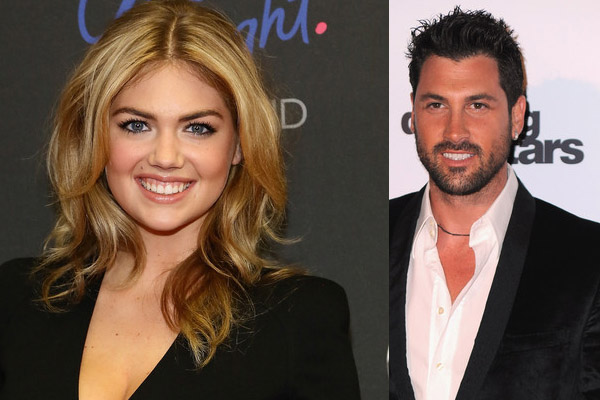 The model went public with her relationship on Sept 26, when she went on a romantic stroll hand in hand with  former ‘Dancing With the Stars’ star, Maksim Chmerkovskiy, 33, in NYC’s West Village.

The couple looked extremly happy and in love, in pictures obtained by Page Six.

The two have been seen together multiple times!

The two have been linked together as being a couple as far back as June 2013, when it was reported that they spent Kate’s birthday together.

The next sighting, was when they were at the Hamptons together, where Kate was filming the movie The Other Woman. Even with the sightings, Kate stayed quiet on the relationship — “We’re just friends” she told reporters at the Style Awards on Sept. 4.

As recently as August, the model was still  enjoying being single. “I’m just having fun,” she told ELLE magazine. ”Obviously, I have a very busy schedule at this time in my life and I don’t put relationships as a priority.”

They make a hot couple!

Both Kate and Maksim are gorgeous – so it was totally time for them to go public on their relationship!