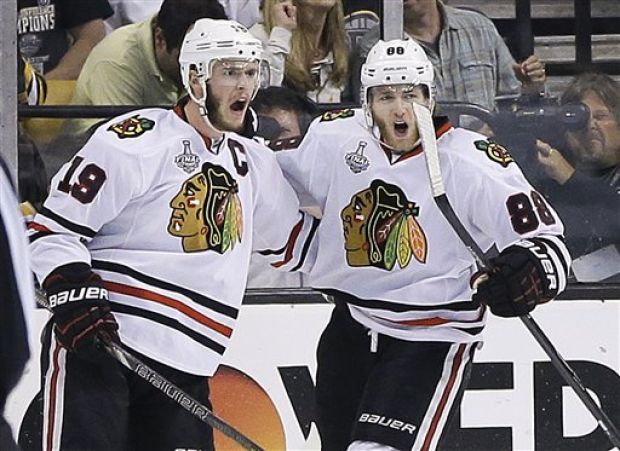 Well, that was easy.

Kane and Toews will each receive matching deals paying them $10.5 million a year though the 2022-2023 season.

“When we started our journey we made a commitment to our fans to be relevant and to see the Chicago Blackhawks become the best professional hockey organization,” Chairman Wirtz said in a statement. “There are not two finer symbols of that than Jonathan Toews and Patrick Kane. The commitment we have made to these incredible young men is equal to the commitment they have made to our team, our fans, our entire organization and the city of Chicago. We are excited for our future and proud that they will continue to be a part of that commitment and success for years to come.”

Toews and Kane each received matching deals from the Blackhawks the last time their contracts were up. Together they have won two NHL Stanley Cup trophy’s for the team.

“I could not be more grateful for the amazing moments and opportunities I’ve been given by the Chicago Blackhawks,” Toews said. “There’s no organization in sports that cares more about the overall experience of their fans and the success of their players. To have the chance to continue with this amazing group of teammates and people throughout the organization is an incredible honor. There’s nothing we want more as players than to continue to win Stanley Cups for the best hockey fans on the planet.”

“It’s great to be able to continue my career in Chicago,” Kane added. “Playing with the best organization in sports and the best fans in the game is a blessing. Since I was drafted by the Blackhawks, the people of Chicago have really embraced me and treated me with nothing but respect. I look forward to many more years of success with the Blackhawks.”

Toews was the third overall pick in the 2006 NHL entry draft and has gone on to amass 195 goals and 245 assists in 484 career-regular season games.