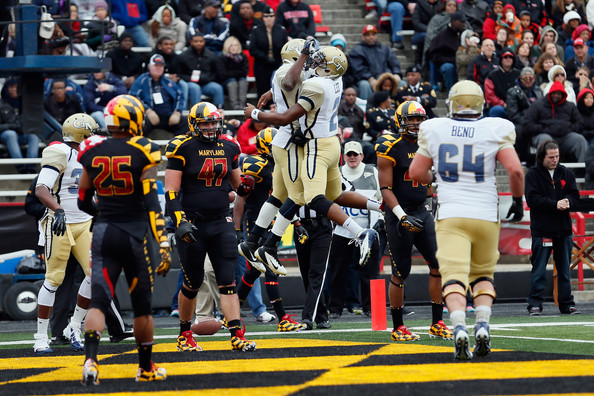 Even the “Maryland Pride” uniforms were not enough to help the University of Maryland. The Terrapins were defeated 31-13 by the visiting Georgia Tech Yellow Jackets.

Maryland was never really in contention. Georgia Tech attempted just four passes all day for a total of 31 yards but made up for it with 370 yards rushing. Orwin Smith led the way for the Yellow Jackets with 89 yards rushing. Six members of Georgia Tech topped 30 yards of rushing.

Shawn Petty was the fifth different starting quarterback for the Terrapins this season. The high school quarterback turned linebacker had to return to his former position for Saturday’s game. Maryland had lost three quarterbacks in the last two weeks. Petty finished his first game as the teams quarterback 9-for-18 with 115 yards passing. Both of his touchdowns came in the second half, including one which occurred as time expired.

This was the second season in which Maryland wore uniforms with the states flag on them. Last year the Terrapins wore them in their season opener against the University of Miami. Those uniforms, which were equally as criticized as the ones wore today, were white instead of black but produced a 32-24 win.