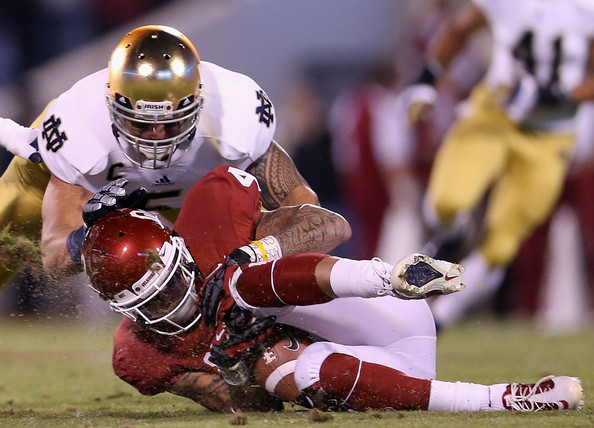 Notre Dame entered Saturday nights match-up against Oklahoma a double digit underdog. The Fighting Irish needed a win to continue their surprising march towards a National Championship while the Sooners were hoping a win would push them back into consideration.

With the line of the game being pushed north of 11 points few would have expected Notre Dame to win by a 30-13 final. The score was largely a result of the inability of the Sooners to finish off scoring drives mixed with a Notre Dame defense who knew when to bend and not break.

Interviewed after the game Notre Dame head coach said “It’s just the way we play.” He described his team as one who was just getting better.

Oklahoma began to move the ball down the field against a tough Notre Dame defense. It appeared that Oklahoma was going in for an early score when a botched snap resulted in a 19 yard loss for the Sooners. On the Sooners second possession they managed a field goal.

Cierre Wood provided a response for the Irish running 62 yards up the middle to give Notre Dame the lead. Kyle Brindza would soon add a 34 yard field goal giving the Irish a 10-3 lead.

With just under a minute left in the first half the Sooners appeared to score a touchdown when backup quarterback Blake Bell came into the game and scored a touchdown. Seconds later the play was called back for offensive holding and the Sooners had to settle for a field goal.

Early in the fourth quarter Brindza would add a 44 yard kick for the Irish.

The Sooners held a advantage in time of possession in the first half but Notre Dame was able to keep the ball away from them in the second half. While Oklahoma had pressed Notre Dame’s defense back onto their side of the field they had not found a way to puncture their way into the endzone.

With just over nine minutes left in the fourth quarter the Sooners figured it out. With fourth and two looking at them and the team in the redzone Bell was again called into the game. This time he threw the ball for a first down. Moments later he scored the first rushing touchdown against the Irish for the season.

Notre Dame struck back with a seven play 73 yard drive of their own and then added a field goal to push the game to a ten point lead. The field goal was set up by an interception by defensive captain Manti Teo.

After Oklahoma was unable to convert on a fourth down, the Theo Reddick put the final nail in the Sooners when he ran in for a 15 yard touchdown.