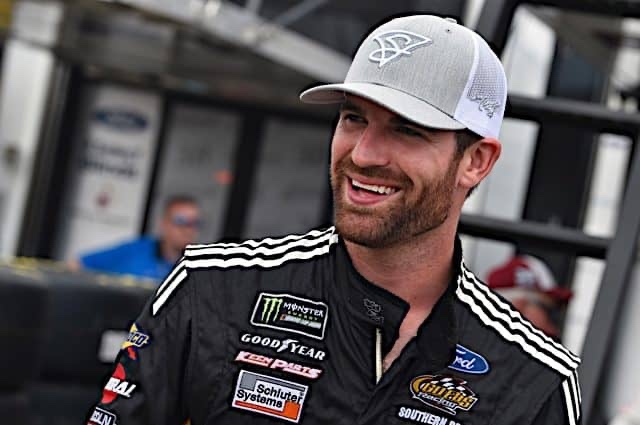 On his podcast, Sunday Money, NASCAR driver Corey LaJoie announced he would be driving the No. 32 Ford of Go Fas Racing in 2020.

The announcement on Tuesday means the driver will return to the team for a second season.

” I don’t know if everybody was expecting that because it took a little while to get done, a little longer than both sides probably would have liked,” LaJoie said on the podcast by Motor Racing Network. “I’m … super excited to go back.”

The deal is for one year.

“I’ve got a baby on the way and a lot of diapers to pay for and I need to be driving around in circles,” LaJoie said.

“(Owner) Archie (St. Hilaire) likes doing one-year deals, which I think is OK because things can change periodically, right?” LaJoie said on the podcast. “I think this is a crazy, crazy time in the sport with people retiring or moving around. The best I can figure, there’s probably only legitimately seven or eight cars that have their drivers committed for 2021. Everybody else is up in the air. So hopefully I can position myself the following year to be in something really good. But I am concentrated fully on 2020 with Go Fas.”

A new technical alliance with Stewart-Haas Racing figures to aid LaJoie’s efforts for 2020.

“We got some Stewart-Haas cars coming into the shop today,” LaJoie said. “I’ve heard they’re going to get two complete cars. Rolling, no motor. … It will have current suspension, rear end, truck arms. I would hope it will be pretty close to what they would send to the race track. That remains to be seen. … They’ll definitely be better than the four-year-old Front Row-Roush cars … The newer cars we had were four years old.”

LaJoie will need to find a new crew chief however.

“We’re talking obviously with the Stewart-Haas Xfinity guys, nobody really knows what’s going to go on there,” LaJoie said.

While other offers did present themselves, LaJoie opted to remain in a position he felt most comfortable.