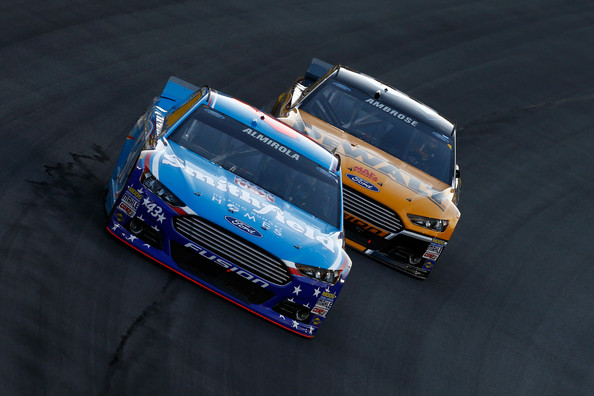 Richard Petty Motorsports considered other manufactures but will stay with Ford.

On Sunday driver Aric Almirola placed the No. 43 Ford Fusion into victory lane after the Coke Zero 400 was cut short due to rain. The win was the first for the No. 43 car since the 1999 season when John Andretti won at Martinsville.

Lee Spencer makes the following statement to close out her most recent column at Motorsport.com

Note: Murstein confirmed that RPM will remain with Ford beyond this year. Almirola’s victory marked the third consecutive win for the Blue Oval – the first time Ford has accomplished that feat in the Cup series since 2005.

It’s not that there were not options. But given the recent comments of the team and driver Marcos Ambrose (No. 9) it comes as no surprise that RPM is staying with Ford.

Currently the team has an alliance with Roush Fenway Racing, something that should extend beyond the 2014 season.

As for team owner Richard Petty, he is already looking towards getting back to the track for the teams next win.

“Well, you know, you’ve been around me long enough to know that I don’t never give up on anything, and like I said, might have been 30 years.  It was what, ’99?  If you look back at the history and Petty Enterprises, all the turmoil we’ve been through in the last seven, eight years and all that stuff, I never give up on the thing.  So it was one of those deals that I said, okay, if I keep working at it long enough, we’re going to be able to overcome all this.”

“Just winning one race doesn’t overcome it.  Don’t get me wrong.  But it puts you in a higher speed track, and you know you can do it.  It proves that we can do it, the drivers know we can do it, and I think it’s just going to make it that much easier to go from here — everybody has got to have a start, and I think this will get us started pretty good.”