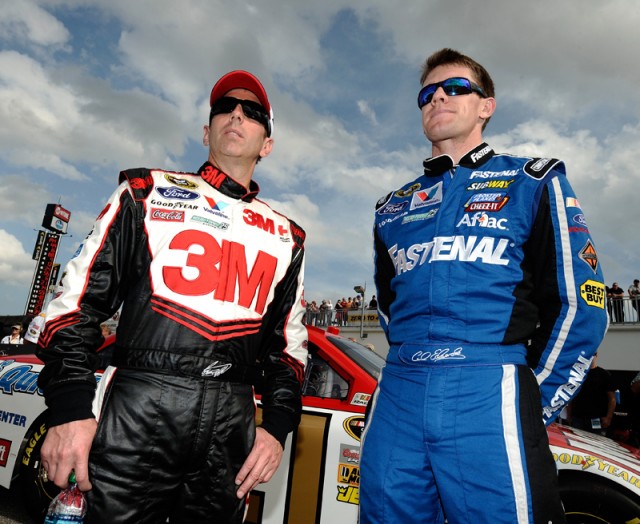 The future of Roush Fenway Racing is in question.

Next season Trevor Bayne will assume the seat of the No. 6 Ford Fusion with Ricky Stenhouse remaining in the No. 17 car. That is about all that is known.

Current drivers Greg Biffle and Carl Edwards – winners of 41 NASCAR Sprint Cup Series races – both have their contracts up at the end of the 2014 season.

No one has said much publicly about the status of Edwards or Biffle, a theme that continued Friday at Michigan International Speedway.

“In due time we’ll have announcements for 2015. We’ve got a lot of 2014 in front of us and we’re obviously focused on that.” said team owner Jack Roush.

Roush went on to talk about some of the problems his three car Sprint Cup tea has dealt with this season.

“If you looked at our year we’ve been probably challenged more than some of the teams have with the difference in the ride height. I know that’s changed the dynamic of the underbody of the car and it’s been a revelation. How low is low enough and how low is too low. Too low is higher than we thought it might have been a month ago and we’re sorting that out. We’re committing to test as much as we can. We’ve got a test going somewhere virtually every week, either a tire test at a NASCAR race track – a sanctioned test – or a bootlegged race track test that’s not on the NASCAR circuit, so we’re testing.”

Recent speculation in the garage has suggested that Biffle and long-time sponsor 3M will return to Roush next season. Edwards has been linked to Joe Gibbs Racing.