On Tuesday, Tireball Sports had the opportunity to talk with Kasey Kahne and ask him about a few things, such as his season thus far, what he thinks about Farmer’s and Hendrick Cars partnering to give away a car and what he thought about the door banging between Jimmie Johnson and Brad Keselowski at Texas Motor Speedway.

Kahne has won two races this season, at Charlotte Motor Speedway and at New Hampshire. He is currently fourth in the NASCAR Sprint Cup standings with two races left in the season.

TIREBALL: So Farmers is giving away a car from Hendrick Cars.com?

Kahne: Yeah. It’s a pretty cool deal with Farmers and Hendrick Cars partnering to give special fans prizes and a free Chevy on Facebook.

If you visit Farmer’s on Facebook you can pick a key daily to win prizes or even be the grand prize winner and win a car from Hendrick Cars.com. Everyone is a winner as there are instant prizes and secret videos that can be unlocked each day. Below is one of the videos:

TIREBALL: I guess my next question would be…do you really raise your eye brows while revving up your engine?

KAHNE: Nah. That was just part of Farmers, we did the drink, eye brows and I drove in reverse and talked in reverse.

TIREBALL: Your title chances took a tumble last week. Will there be any difference in how the team prepares?

KAHNE: We talked about this earlier this week. I think we will be pretty similar. We talked about being  prepared for Homestead. Phoenix is something we have been ready for.

TIREBALL: Does this (being out of contention) allow you to take any more risks?

KAHNE: There is definitely things that we can do. We are in a box now. We are fourth and we can take a chance on fuel. We try to get
everything we can every weekend. 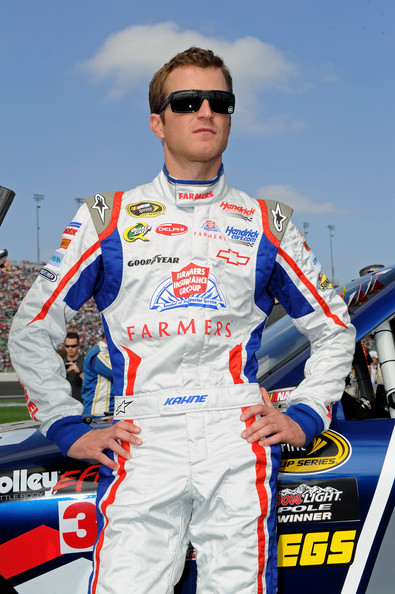 TIREBALL: You won the first race at Phoenix after the repaving. Before that your numbers there were not as good. Does the repaving or re-configuration of a track you’ve had some struggles at change your outlook on it?

KAHNE: I don’t know what it does. I never really cared  for Phoenix. I think the tire combination worked out for me. We were fast there the first race this year.

TIREBALL: Last week at Texas Brad Keselowski and Jimmie Johnson beat on each others doors after a restart. Fans reacted positively to this. Do you feel that this type of racing is something that is missing in NASCAR?

KAHNE: I think some of that stuff late in the race is okay. They were going hard. Seemed like a great race to the finish. Its great for the sport and the fans. They both wanted it really bad… there are times where its hard to do that because of the aero balance… if you do it late you have a good shot. Just be careful. The biggest thing is how sensitive the race cars are.

TIREBALL: You’ve raced in a few different series, are there any series you still want to try your hand at?

KAHNE: I feel like Ive raced a lot.I’ve enjoyed a lot. I think I’m pretty good where I’m at.

TIREBALL: Is there a specific moment in your racing career that you would like to forget?

KAHNE: I don’t think so. There are things you wish that didn’t happen, good bad or indifferent you learn from it and move on. They all happen for a reason.

TIREBALL: So… is there a track not on the NASCAR schedule that you wish the series went to?

KAHNE: I don’t know, hard to say. We go to a lot of great tracks. I’d love to race the cup cars at Rockingham again. It’s been a while since that has happened though.

TIREBALL: Finally this season will go down as one of your most successful. It appears you will finish a career best in points. What is
the biggest thing you take away from this year?

KAHNE: Lot’s of little things… being competitive all season long. I feel like we can get better the longer we are with Hendrick Motorsports.