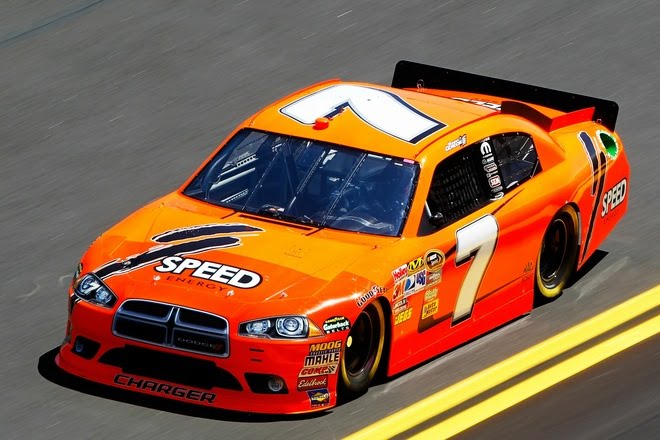 When Danica Patrick made her announcement of going full time in the Nationwide Series with a limited run in the Sprint Cup Series she said that she would like to continue driving the #7.

Patrick has driven cars with the #7 almost her entire motorsports career but on the Sprint Cup side veteran Robby Gordon is assigned that number. Gordon has run a one car operation featuring the #7 for the last six years. He has also ran cars numbered #07 and #77 on a part time basis as a second car.

Gordon says he will not give up his number for Danica. Why would he? He’s not on Danica’s team so this isn’t a situation like when Minnesota Vikings punter Chris Kluewe surrounded his #5 to new quarterback Donovan McNabb. A buyout of the number like the one Eli Manning gave New York Giants punter Jeff Feagles, an all expenses paid vacation, also isn’t likely.

This isn’t the first time the subject of numbers has come up in NASCAR. Just a few years ago Patrick’s boss on the Nationwide side, Dale Earnhardt Jr, faced a similar problem when he left DEI and headed for Hendrick Motorsports. Earnhardt wanted to carry his familiar #8 with him but his step mother Theresa wanted to keep the number at DEI. Eventually Robert Rates stepped in giving up the #88 for Earnhardt to use.

Much like that situation I am hoping Gordon doesn’t back down. The number is his, until he stops renewing it or changes it. He got to pick the number because it was there. He shouldn’t feel pressured to giving up that number because someone else wants to use it. Earnhardt has remained on tv with the #88, he’s still the winner of the yearly bogus as it is favorite driver poll. He’s as popular as ever.

I can’t imagine anyone would forget which car was Danica simply because it didn’t have the number 7 on it. Actually I didn’t even know she drove Indy car #7 until a year ago so go figure.

Stand firm Robby and GAS ON!