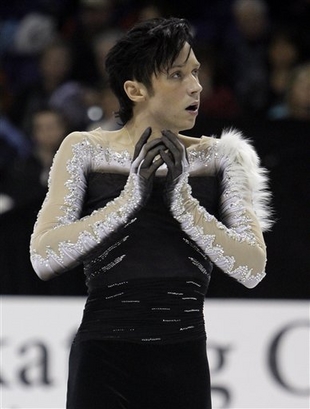 Well Friends of Animals is at it again this time complaining about US Skater Johnny Weir wearing fox fur on one of his costumes.

Now I don’t know anything about Johnny Weir other then he’s a skater trying to be in the Olympics but I gotta tell you he looks like a woman to me.

The story about Weir of course is the fur on his costume. I don’t really care if people wear fur or not. Also let me be clear here: I have no problem with men skaters on ice, pavement or any other surface.

Bbut that people think it’s ok for men to dress this way as long as there’s no fur then well you got my water boiling.

Frankly someone should just step in and tell the man how to dress.

Then again I guess the man is gay.

On his site, Johnny Weir Online, Weir talks about the rumors surrounding his sexuality.

“People talk. Figure skating is thought of as a female sport, something that only girly men compete in. I don’t feel the need to express my sexual being because it’s not part of my sport and it’s private. I can sleep with whomever I choose and it doesn’t affect what I’m doing on the ice, so speculation is speculation.”

Weir continued, “I like nice things, and beautiful things, so if that is the only way people are determining that I swing one way or the other, then to me, that’s sad. You can’t judge a book by it’s cover, ever. I never get angry about things because it’s human nature to be jealous and rip people to shreds if you don’t like them, regardless of the subject. I am who I am, and I don’t need to justify anything to anyone.”

I guess now we should be asking is homosexuality something we should be supporting int he Olympics? Perhaps I’ve offended someone now. Oh shoot me.