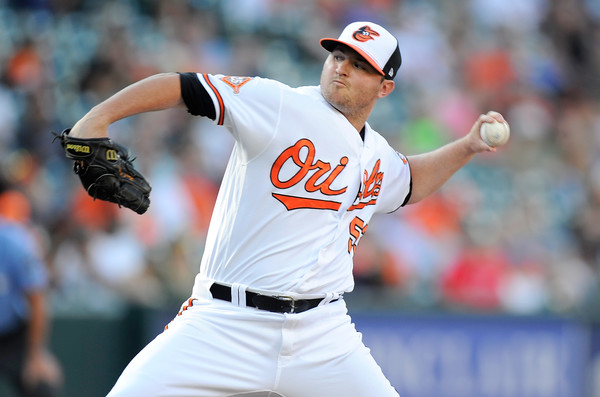 Orioles closer Zach Britton ruptured his Achilles during an offseason workout on Tuesday and will now be sidelined for at least six months.

Britton, 29, looks unlikely to see the mound until the second half of the season. He’s expected to earn $12 million in salary arbitration this year.

The news about Britton is about the worst thing possible for the Orioles. Britton is believed to have been shopped this offseason but the Orioles front office was still trying to determine whether or not they thought they could contend in 2018. He was also nearly dealt at the trade deadline last season to the Astros – whether or not owner Peter Angelos is the reason that deal fell through is still debated.

BREAKING: Orioles closer Zach Britton ruptured his Achilles yesterday working out in California. Expected to be out at least six months.

Already fielding offers for Manny Machado, the Orioles may now start a rebuild attempt a year early. Machado is reportedly seeking a deal north of $300 million and all reports suggest the Orioles believe they have zero chance of signing their star. Machado, who has primarily played third base, is also requesting to play short stop this season.

Brad Brach would seem to be the next man up in the Orioles bullpen in place of Britton. Brach however is set to become a free agent at the end of the year as well. Brach turns 32 in April and is coming off a 2017 season that saw him go 4-5 with a 3.18 ERA and 18 saves in place of Britton. He was a 2016 All-Star and could even be a candidate for a trade himself.