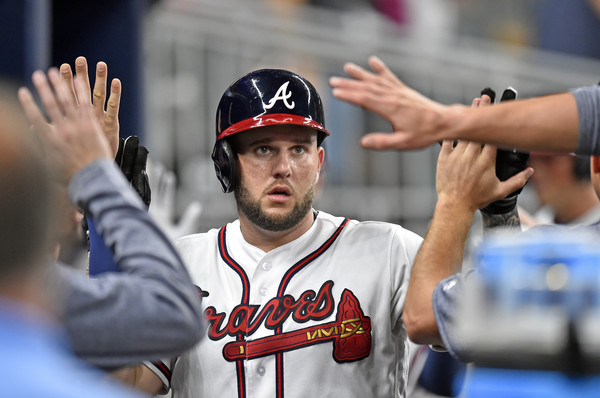 Matt Adams has signed a one-year deal with the Nationals. The deal is worth $4 million and contains another $500,000 which can be obtained though incentives.

Adams, 29, was recently non tendered by the Braves. His signing places him behind Ryan Zimmerman at first while providing the Nationals with a player in the mold of Adam Lind who left via free agency.

Adams shed 30 pounds prior to the start of the 2017 season and had one of the best of his career.

Traded by the Cardinals to the Braves last season, Adams finished the year with a strong .274/.319/.522 batting line with 20 home runs and 65 RBI in 131 games. His ability to hit right handed pitching last season makes him a valuable off the bench option for the Nationals.

Matt Adams has $4M deal with nats plus 500K incentives

Unfortunately for Adams he again finds himself on a team where his path to regular playing time is blocked. Previously he’s been blocked by Matt Carpenter and Freddy Freeman.

Fans of the Braves are going to see the Nationals a bunch this season and the first time Adams delivers against them it’s going to serve as a reminder that the Braves could have kept him but opted against the roughly $5 million he’d make in arbitration.