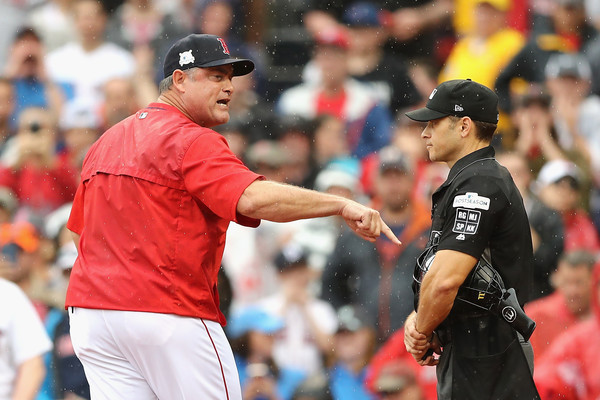 One of the interesting story-lines this post season was wondering when John Farrell would coach his last game for the Boston Red Sox. It was Game 4 of the ALDS and Farrell didn’t even stick around to see it though after he got himself ejected arguing balls and strikes on a pitch that struck out Dustin Dedoria.

The #RedSox announced today that John Farrell will not return as manager in 2018. A search for a new manager will begin immediately.

On Wednesday the Red Sox annouced they had fired their manager of five seasons. His five seasons with the Red Sox unfortunately will be remembered with back-to-back losses in the ALDS and two last place finishes in the AL East rather than the 2013 World Series or the back-to-back AL East titles from 2016 and 2017. He finishes with a 432-378 record and should receive interest from other teams should the now 55-year-old seek to get back into the game.

Red Sox president Dave Dombrowski announced that the search for his replacement has already begun. Dombrowski hired two managers during his time with the Tigers in Jim Leyland and the recently fired Brad Ausmus.

Expect a long list of names to be added to the rumors of who will be the Red Sox next manager. In addition to Ausmus, Gary DiSarcina, Alex Cora, Jason Varitek and Tony LaRussa have already been mentioned by those speculating who will manage the team in 2018.