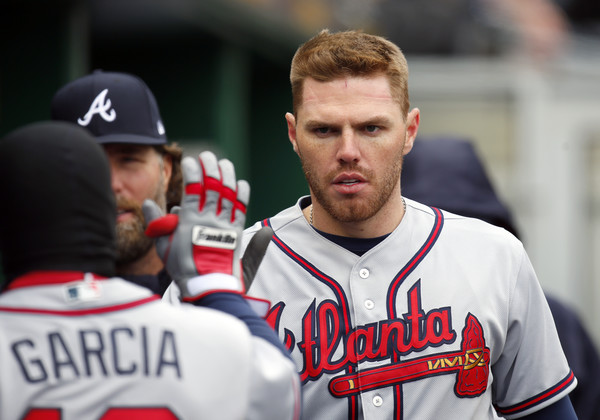 Rarely will anyone consider a four game series to start May crucial to any teams season but alas two sub .500 NL East teams going in opposite directions are playing one another. The Mets and Braves meet on Opening Day and the outcome went about as everyone would have figured a 6-0 win for the home Mets. Noah Syndergaard was phenomenal and despite the best efforts of Braves ace Julio Teheran who matched him, the Mets offense managed six runs off the Braves bullpen. The Braves would win two days latter before falling in that series finale scoring just five runs across the series.

Things were little better for the Braves dropping three in Pittsburgh, one in Miami and then after a sweep of lowly San Diego dropping six straight to Washington and Philadelphia before righting the ship against the Mets and then pummeling Milwaukee winning two of three on the road. Suddenly the Braves bats look energized, Freddie Freeman looks like an MVP candidate and the rest of the lineup suddenly does not appear to be the patch work of veterans that it was constructed to be this winter.

Meanwhile the Mets have dropped into the bottom of the NL East going 1-8 or 2-12.. you get the point. The Mets now 10-14. The Mets were strong out the gate winning series against the Braves and in Philadelphia and then something happened. A few injuries, the bats cooled, the pitching was not as good and just like that the bottom.

A four game series in Sun Trust Park could break someone’s season here. Winning all four seems difficult for either side but three wins is not out of the question depending upon which Dr. Jekyll and Mr. Hyde shows up. Splitting the series would not be bad for either side. Are the Braves really for real or are they just feasting upon bad teams or are the Mets as desperate for runs without Yoenis Cespedes as they appear to be? One thing is for certain being on the losing side of a four game sweep is not something either team can afford.