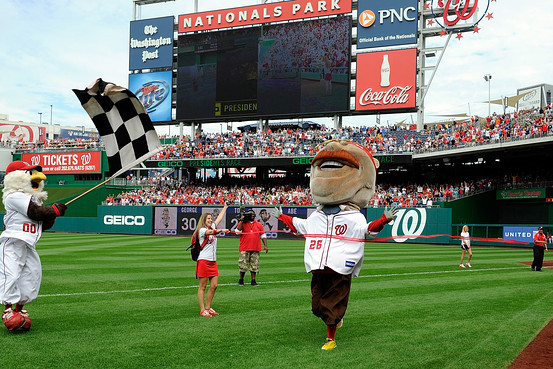 Theodore Roosevelt has been trying to win the Washington Nationals mascot race for years. In the fourth inning of today’s game against the Philadelphia Phillies it finally happened. It was the last game of the regular season for the Nationals who are playoff bound.

The mascot of Teddy Roosevelt had lost over 500 races since the team moved to Washington. In fact he had a huge o-fer going, 0-for-566 according to ESPN’s Jayson Stark. His only win had been a one on one race against the Baltimore Orioles bird.

A little help came in the form of something, that looked like a thinned out mascot for the Nationals opponent the Phillies phanatic, who tripped up the other three competitors. After the race Roosevelt ripped off his usual jersey, revealing a red “Natitude” t-shirt, celebrated.

Abraham Lincoln has the most wins 214, followed by George Washington with 162 and Thomas Jefferson’s 161.